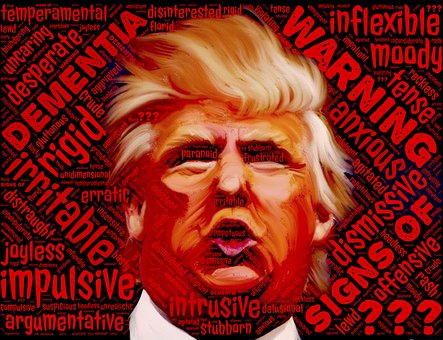 Mr. & Mrs. trump got their Covid shots in January.  The news was released this month, kept quiet, so as not to disturb the anti-vaxx-ers who support him, as well as his lies about the fact that Covid doesn’t exist, and if it does, it’s just like a bad cold or the flu.

I think it’s strange that…

…people are asking for others to pray for the “president.”  I just don’t have time to do that.

I’m still busy thinking about the kids who were ripped out of their mother’s arms, torn from their families, and placed in internment camps.  Kids who DIED ALONE IN INTERMENTS CAMPS laying on a cement slab, without any medical care.

I’m still busy thinking about the people arrested, beaten, knocked down and water hosed, shot with rubber bullets, by militarized police and unmarked soldiers, for marching peacefully in our streets.

I’m still busy thinking about the black lives that DIDN’T MATTER, and the police who weren’t punished for what they did.

I’m still busy thinking about the KKK and the white hate groups that are being encouraged by the president, to be violent and spread their hatred.  Allowed to carry automatic weapons in the streets.

I’m still busy thinking about the people who can’t live on minimum wage, if they can find jobs at all.  Those who can’t get an education or FOOD,  (living in a food desert).

I’m still busy thinking about the disabled people the president mocked.  The POW’s he insulted and attacked, the way he treats those who have had the virus, which he never acknowledged,  and the way he has ignored those who lost those their loved ones to this disease.

I’m busy thinking about how he killed so many people by encouraging others to not wear masks.  Telling people the virus wasn’t real, it was only as bad as the flu, not to worry about anything, it was almost gone.  I’m busy thinking about all the people who died because his followers refused to do the right thing and wear a mask.

I’m still busy thinking about the ugly things he has to say that hurt so many others.  I’m still thinking of his never ending lies and the easy way he dismisses the suffering of others.

“I’m busy thinking about how he brags about hijacking the upcoming election, the way he took over the post office, the way he keep spreading LIES.

I mean, I could go on and on, but really, the president isn’t even on my list of things to think about.  He never will be.

trump wants war and he’s coming to BLUE state Chicago to start one.

He has hated Chicago since our last mayor wouldn’t let him take undocumented workers, and let their kids die on cement slabs and destroy families.  Chicago is a Sanctuary City and trump wanted that title removed.  Emanuel, told him to try it, and he backed off.  Besides, the FBI was already here.

I believe trump is doing this because of his dislike for the city and because he wants to show how powerful he is, so that people vote for him.  He’s a bully and likes shoving people around.  Guess what?   Chicagoans know how to shove back.

Now hundreds of feds, DEA, SWAT and guys who can beat and spray people are being sent, to stop the violence with more violence and the threat of violence.

There’s a worry that the TOOPS won’t work WITH the CPD but do OTHER things with immigrants and undocumented workers.

What Chicago needs is FEDERAL MONEY to put into poor neighborhoods…but trump WON’T SEND THAT.  Instead, he’ll send violence, so he can get off on the things he loves…power, and being a bully.

Chicago needs a lot of things, but it doesn’t need more guns and guys carrying them.

I hope we don’t have a war in the city.  I have a bad feelings that a lot of people are going to be beaten and killed by the guys they’re sending.  I don’t doubt that some of them might die as well.

Maybe the gangs, and other’s, will beat back the well armed, well trained, people who are being sent here to start that war.  And I do believe that’s their real mission.  The thing is…the well armed guys don’t KNOW THE CITY.  THAT is an important issue that will work for the gangs and other gun carrying Chicagoans.

The kind of help CHICAGO needs is financial and corporate.  The city needs to build up the neighborhoods that have been decimated by inequality and poverty for generations.  WE DON’T NEED MORE GUNS, the city needs MORE MONEY.  Money to help small businesses stay open.  But the packages go to big rich companies who are friends with the big rich people, not to the poor independent shop owners who are struggling to survive.  The neighborhoods in trouble need food stores and other businesses they need affordable housing, better schools, and more resources for kids and families.

The city has a lot of problems, but more violence isn’t going to help any of them.   How many more people need to disappear off the streets, put into unmarked cars and be taken away, by government guys wearing camouflage uniforms?  Where is the person they arrested?  What’s is going on with that?  They lied and said the men were surrounded, but the video shows that there was no one around them except other than the person trying to ask the guy what his name was.

trump said there will be a lot of arrests and people will be put away “for a very long time.”  He needs to go away for a very long time but, of course, that’s not going to happen, because he has MONEY and the neighborhoods he’s going into are poor and powerless…that’s why they have guns and violence to begin with.

This is a really bad idea.  If the guys being sent here, don’t do as they are told by the city, it’s not going to go well.  I think they’re under orders to do very bad things.

I hope I’m wrong.  I’m not sure what they’re planning on doing.  Arresting gang members?  Drug pushers?  Those who killed people in the street?  Are these guys trained to work with gangs?  Because the gang members, and others who have guns, aren’t the enemy on foreign soil, they’re still Americans, and they live HERE, in NEIGHBORHOODS were regular people live.  I hope more innocent people don’t die.

WE THE PEOPLE…ARE RESPONSIBLE FOR THIS MESS.

And what will we do differently?  WILL THE GOVERNMENT SUDDENLY SEND MONEY TO MAKE THINGS BETTER WHEN THEY LEAVE HERE?  Yeah, I don’t think so either.

trump must be jumping up and down with excitement right now.  I bet he won’t even be able to sleep.

Mayor Lightfood must be freaking out.  If she loses control of these trumped up troops. OMG

Truthfully, I can’t imagine what theses people plan on doing.  Going into neighborhoods and trying to find guys?   If people who live here don’t want to be found…good luck.

This is going to be a summer to remember.   Those troops don’t know what they’re in for.

trump plans on sending troops into other cities as well.   He wants the country to burn and he wants to light the fire.

Oregon wants the feds gone, since they are making everything WORSE.  trump refuses to take them out.  Why would he?  He’s having fun.

Maybe the gangs from Detroit will drive down here to see if they can help out.  Who knows.  Anything is possible.

not my president’s travel ban…read it and weep

The truth still gets out, now and then…

trump and the media…