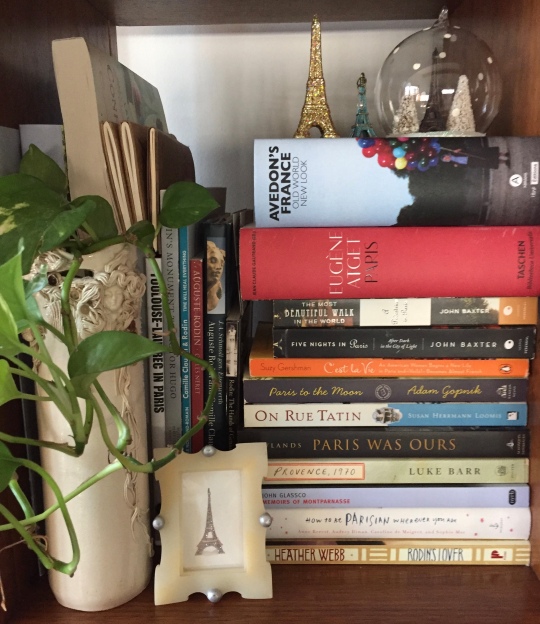 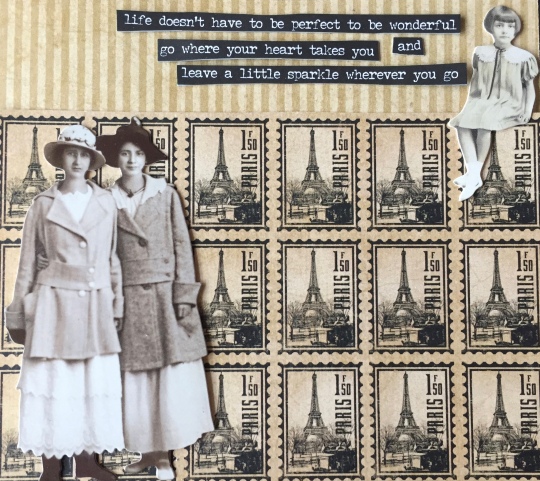 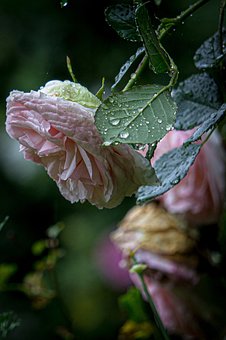 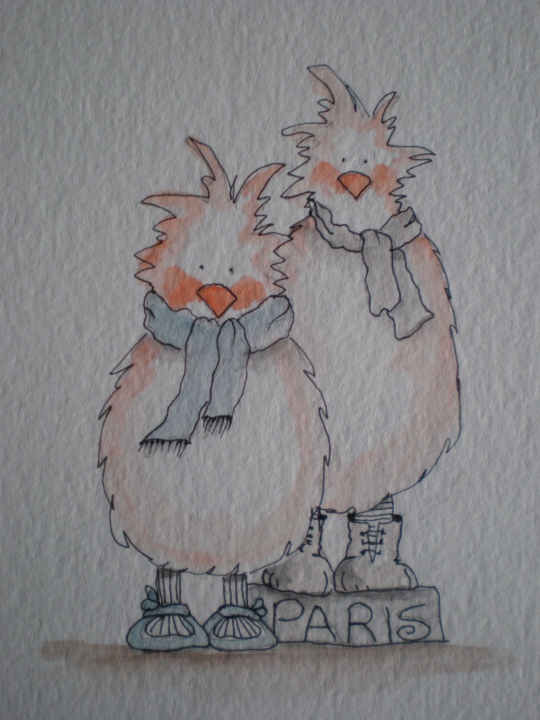 Mmmie is reopening her scarf stall, the one next to the Rubber Duck Pond.  If you want to feel as if you’re in Paris, you absolutely must wear a scarf.  Genders don’t matter, EVERYONE wears a scarf, even when it’s hot outside.  The chicklets were in Paris when this picture was made. They love it there.  It’s so wonderful.

The chicklets got confused and went a bit Italian when they opened the cafe, but no worries, they’re working on the problem. 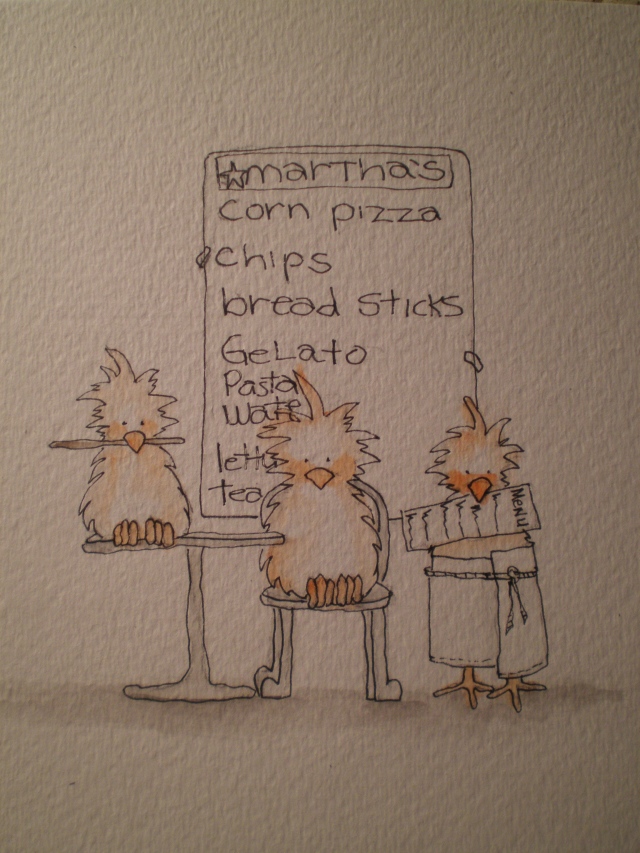 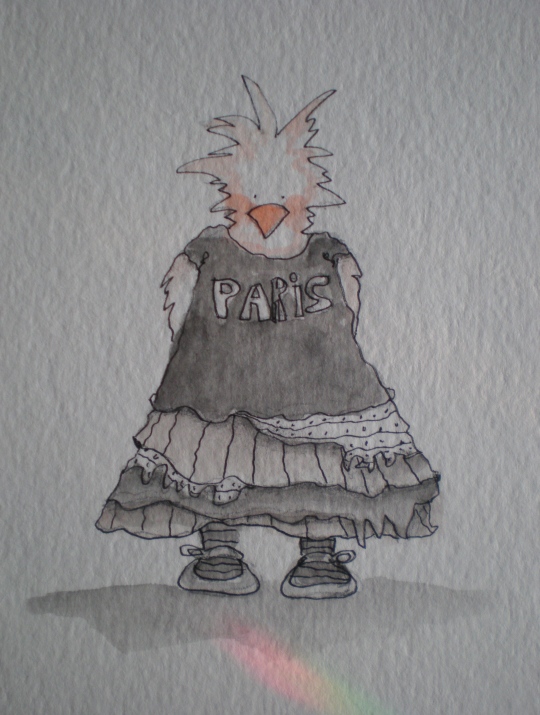 Suzzette found the dress he made to wear to Paris.  The chicklets are getting into the grove.  Plans are being handed out and the work is coming together nicely. 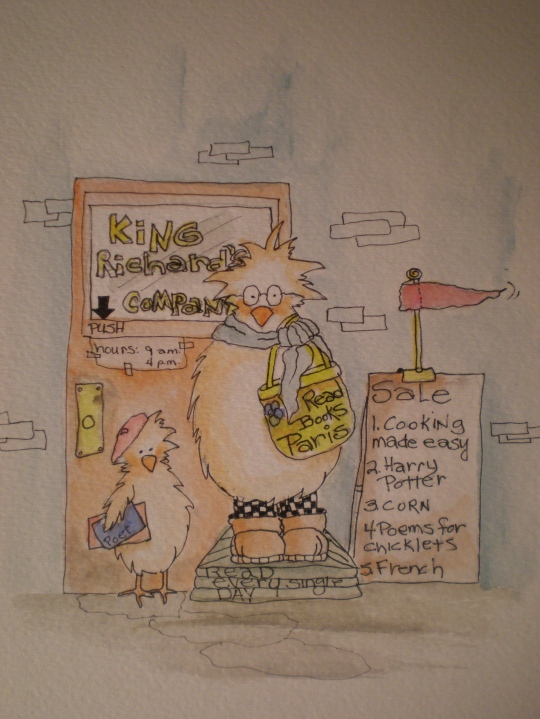 The chicklets have reopened the bookstore.  They built it, after returning from Paris and Shakespeare and Company.  It was open for quite a long time but then they became interested in other things.  Now, with the prospect of a new Paris Party on the agenda, they are dusting off the things they brought with them from their trip.

Everyone is getting very excited about the party and the reopening of all the Paris shops.  The Stage Crew is working hard and so are the chicklets in the costume department.  The Kitchen Crew has come up with new designs for treats and the chicklets are trying to learn more French.

It’s an ongoing process and the date for the Party has not been officially set.  I’ll keep you posted.

Another reminder from the chicklets… 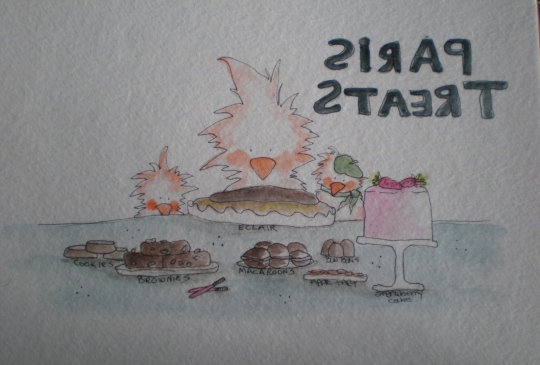 The chicklets really enjoyed the sweet treats in Paris, so they left this for me to see, knowing that I loved them as much as they did.  The party is a go, so they are starting to meet and decide what they want to do for PARIS NIGHT.  I think it’s going to be wonderful. 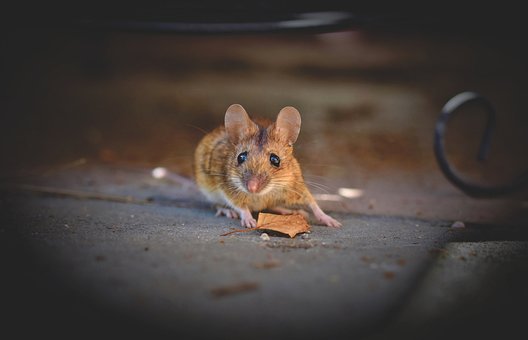 Sylvia lives in the attic of a bookstore in Paris.  She’s named after the original owner and founder of the shop.  Every mouse who has ever lived in the bookshop has been named Sylvia.  And a mouse has always lived on bookstore premises, because everyone knows that having a mouse in a bookshop brings good luck.  Certainly Ms Beach knew it, when she invited the first mouse inside.  And since a cat always lives in the shop as well,  a deal was struck stating that the cat would always protect the mouse from harm.  So far, everything has been fine and the bookshop is one of the most famous in the world.

Sylvia takes her job, as bookstore mouse, very seriously.  She scampers around, cleaning up small messes, putting books back in their proper places and dancing in front of small children.  Her nest is decorated with the pages of old books and it’s comfy and warm.  Sometimes she sleeps with the cat, but she’s most comfortable in her own bed.

Although, when it’s very hot, she sometimes sleeps in a small basket by the register, so she can catch a breeze and greet customers, while listening to all the different languages and accents.  She’s very good at guessing where people are from.  She said that she learned that skill from her mother, the former bookshop mouse.  She inherited her position and her love of words, from her.  She misses her mom terribly, but knows that she was happy to pass the job of bookshop mouse, into her capable paws.

Now and then she goes out in front of the shop, in order to pick up a leaf or two.  She likes to have a few in her nest.  She knows it’s dangerous, but the cat usually watches out for her.

She’s very happy with her life and with her job.  She gets plenty cheese and crackers, as well as other delicious snacks and treats.  She also gets a lot of pets and kisses.  Although, it seems that some people are afraid of her.  She’s not sure why, since people are a million times bigger than she is and she would never hurt them in any way at all.  One of the girls who works there said that people have been taught to fear mice.  She asked her why, but the girl said she didn’t have any idea why anyone would teach that, or be afraid of her.  Then the girl picked her up and kissed her a bunch of times and put her back into her basket.

When someone comes in an asks for a particular book, she knows just where it is.  There have been times when the staff needed her help and she was able to take them to the right shelf immediately.  But she does live there, after all, and she spends a lot of time reading and looking at the books.

The new Sylvia, the owner, is very nice.  She’s made some big changes for the better, but the one thing she didn’t change was the position of the bookstore mouse.  She knows how much luck the bookstore mouse bring to her shop.  Like the wonderful woman she was named after, all the Sylvia’s have to stick together. 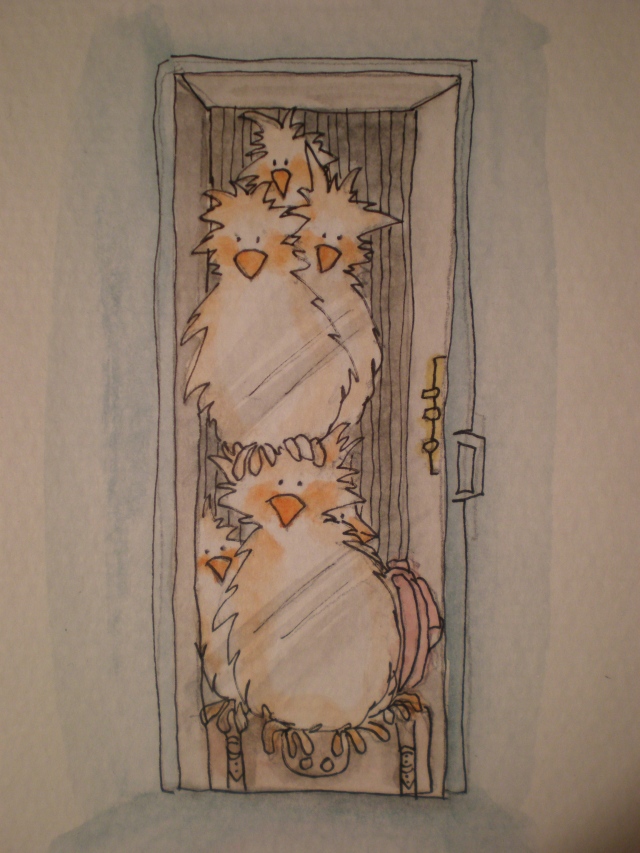 The chicklets have wanted to go back to Paris, since we got home from Paris, and that four years ago.  Lately, they have been leaving old pictures around for me to see.  This one was from the elevator of one of the hotels we stayed at.  They had such a good time.

I’ve explained the virus situation to them, but they don’t really think chicklets can get the virus.  I told them that I can’t send them to Paris alone and they understood that.  They know a hotel won’t just let a bunch of chicklets move into one of their rooms for two weeks, not without a human, but they want to go anyway.

I told them they should have a Paris Party for everyone and now they’re all excited and I think they’re going to do it.

I’ll keep you posted.  If you can’t go to Paris…bring Paris to you, right?  Chirp.