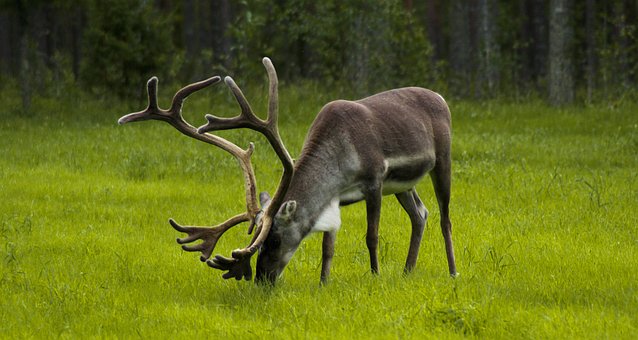 This is Max.  He’s building up his strength on his way to the tryouts, for Santa’s second team.  The second team of reindeer exist, in case one of the original reindeer comes down with a cold, or an injury.  It’s never happened but Santa thinks it better to be safe than sorry.

The second team shows up around the first of December.  They are wild reindeer and come from all over.  When they reach the North Pole, they stay in the barn behind Sant’s house and, happily, Ms Claus feeds them cookies everyday.  She bakes a lot.  You would too, if you lived there.

Meanwhile, the elves are working hard on the sleigh, adding a new GPS system and an insulated cup holder for Santa’s hot chocolate.  Everything is being polished and inspected for  damage, after last year’s trip.

During the day the new reindeer will practice flying and pulling a sleigh.  The Original Team will give them pointers and critique their performance.  It’s all done with goodwill and joy.

The elves don’t make as many wooden toys as they used to.  Several of them took electronic classes, so they could build the things today’s children want.  Once they blew a fuse and the entire North Pole went dark.  The elves fixed everything quickly, but they are still laughing about it.

FYI…reindeer love sugar cubes and while they aren’t good for them, please leave a few next to their carrots.  I mean it is christmas, after all.