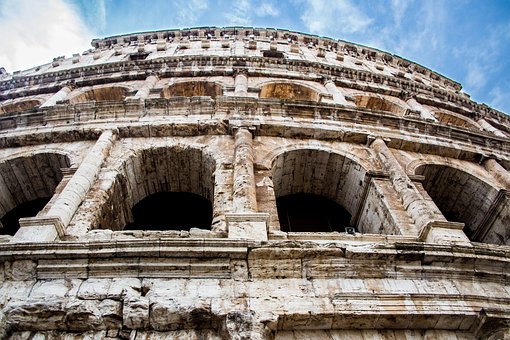 The colosseum looks the way it does, not because of age, or wars, but because the Italians tore it apart, in order to use the materials to build parts of Italy.

I took this picture.

I’m hoping some kick-ass grassroots groups start popping up because I’m ready to get back to work.  Groups with a bit of financial backing and an agenda.  I’m ready to march, demonstrate, get back to the streets, lecture, write newsletters, do whatever it takes to get things rolling.  That’s something good that can come out of this…solidarity.  Illinois is a BLUE state (I’m so bloody proud of that), so something should be happening soon.  See that’s another reason I love Chicago.  Blue, through and through…it’s a beautiful thing.

I’ve heard of more people breaking off friendships and friendships being stressed…people avoiding each other.  This isn’t like other times, believe me.

Anyway, my cousin’s son texted and said that my cousin and I want to move, we should be able to get into Italy because we are half Italian (her mother and my father were sibs).  I said that I was good with that, as long as I could learn Italian folk dancing and how to swear in Italian (I know some of the hand movements…I watched my grandma).  I’d rather live in Paris but it would be easier to get into Italy and I could take trips to Paris and stay for extended periods of time.  My cousin loves Italy…I love Paris.  She cooks…I fight and embarrass  her, that’s always been my job…she NEVER fights…NEVER. Together we make up one entire Italian (who can’t speak Italian).

When I went out today, I wore a scarf I bought in Venice.  I’ve been thinking about Venice because of that.  Such a fabulous place.  That’s the best part about souvenirs…they take you back to the place you were having fun.

Pigeons roosting by the Colosseum in Rome, Italy (2 photographs)

They had a nest in the right hand corner of the ancient arch.  This was taken right next to the colosseum. The pigeons were very busy building a nest.