Yesterday was a nightmare.  I totally freaked out, or as the kids today say, I tweaked out.  I decided to go back and get the cat.  Debbie talked me down this morning and said she would go with me, or go by herself, if I would just relax and not be insane.  She told me to call so I did.  The woman said I couldn’t have the cat back until about a week and a half because he was being sent to the vet tomorrow to be “fixed,” get of all his shots and be checked for worms.  I was told that I could adopt him when he was healed and ready to go home.  She said he was doing fine and the only time they have any problems with cats is if they are critically ill, or vicious.  He is neither of those things.  She gave me the number to call if I want to adopt him when he’s ready.

I was up all night and even though I didn’t say anything to Debbie she knows me well enough to know that I was freaking out.  So, the bottom line is, she said it’s up to me, but he’s so beautiful and sweet that he’ll find a loving home, or we can go and get him once he’s been seen by the vet and can go home.

I can breath again.  He is okay.  I think with his front paws being deformed, someone may fall madly in love with him, you know how cute he is, and give him a good home, hopefully, with tweens, or kids who will play with him and love him.

I think I’m as okay as I’ll ever be (which isn’t saying much), and if I change my mind, I can go and get him later.  I can handle ANYTHING but when it comes to animals I can’t think straight.  I want all of them to live with me so I can hold them and keep them safe.  As if I could do that.  I’ve had so many cats in my yard for so many years, I can’t keep them all. My friend Candy rescues cats and has cats who kind of live on her back porch.  She and her wonderful husband do rescue and release, after the cats see the vet and get fixed.

I KNOW that I always do the best I can but I always fail myself and never do enough for them.  Sigh.  I’m going to try and be, well, I’d say normal, but I’m not sure what that is for me, and take deep breaths and go out.

Every time I pick up an animal, or start feeding one around my house, Debbie and everyone else gets ready for me to start watching them and worrying about them and setting up houses everywhere.  They know that if something happens to them, or they don’t come home for dinner…well, you know, they will have to deal with me.

I stop in the middle of four lane highways and get geese across the street, or get dogs to safety.  I used to carry a box and blankets in my car to pick up anyone who needed help but I don’t do that any longer.

I’m tired.  LOLOL  So, I think I’m good, at least for awhile.  Just wanted all of you who were so kind to me, to know how he was doing.  The lady on the phone (after I called three times) said, I took this job to HELP animals, not harm them.  And I told her I was so grateful and thanked her over and over again.  LOL  I don’t blame her for being upset with me but that made me feel a lot better.  I love him and want him to be happy and have a good life.  So, it’s just Em now and I think I’ll be able to sleep tonight.

Ginger Snap is on his way…

I trapped him this morning.  He’s going to a no-kill shelter, where my granddaughter volunteers.  Maybe they can do something about his front paws and he will be well cared for, for the rest of his life, if he is not adopted.  He became so aggressive he just about drove Emily away.  So I’m waiting for my son-in-law to pick him up.  I’ll be happy to see him go and happy that Emily can relax and have a good life.  She’s my baby and he was terrorizing her.  Unacceptable.

You all know Emily and Ginger Snap…

I fed them before I left for the airport.  My grandson was going to feed them while I was gone.  Apparently the cats were terrified.  Ginger took off and I don’t know what Em did. Someone ate the food and my grandson said that he saw a skunk cleaning off one of the plates.  I never leave food outside but he didn’t know if the cats would come out while he was there, so I told him to just put the plates down and leave.

It took me a while to coax Emmie out of hiding but Ginger was flat out gone.  I thought he may have found a new home, or else he was just waiting until he was sure I was back.  I wasn’t worried and Emmie was delighted that he was gone.  She was so happy to have her yard to herself again.

Today, Ginger was staring at me from the bench in front of the kitchen window.  He’s back and all is well, other than the fact that Emmie doesn’t like him.

And, by the way, no one has been inside the huge insulated, winter proof, houses I bought for them.  Sigh.  There’s still hope but I think it’s slim. 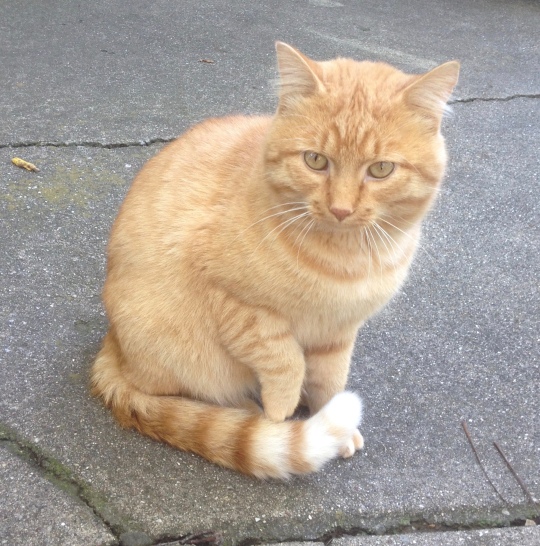 I am taking tomorrow off…so see you on the weekend:) 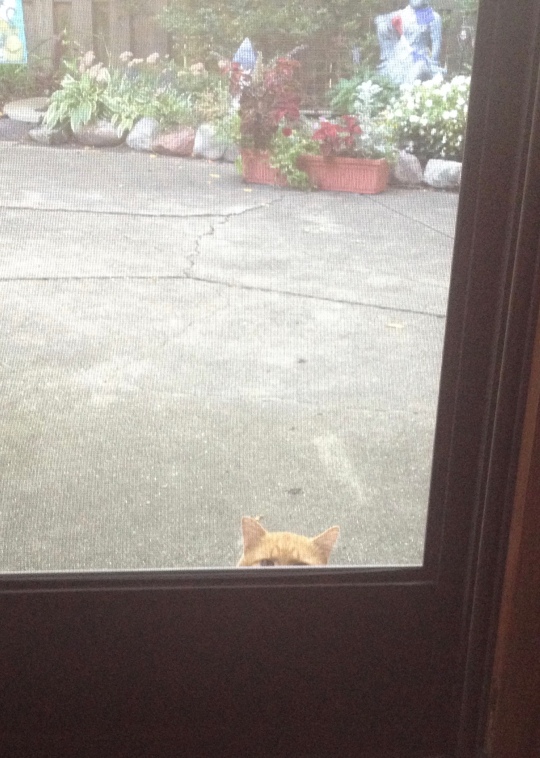 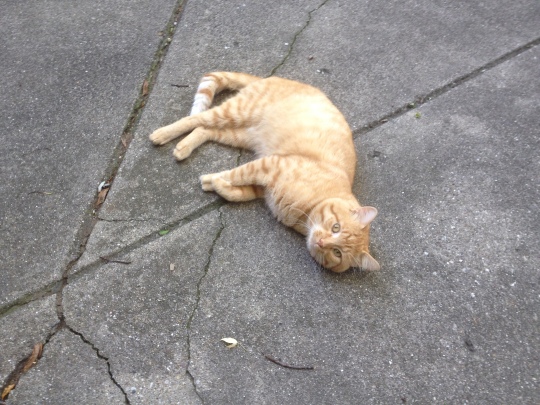 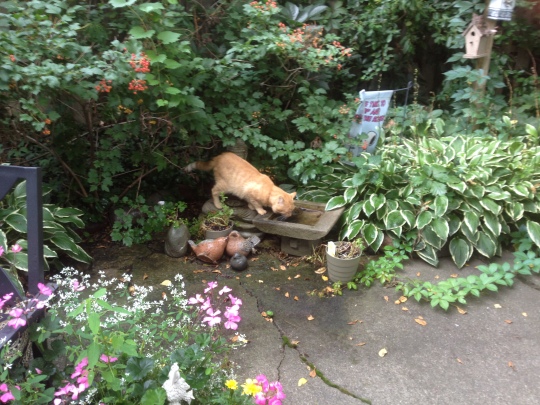 Ginger Snap in the yard this morning.  He just had breakfast and was getting a drink.  Cats have the right idea about life…Ginger thinks Buddha is just something to stand on that makes his life easier and enables him to get a drink out of his favorite bird bath.  We can learn from that.  We give all kinds of meanings to the things we make up.  Cats know what’s real and basic.  We lost that ability when we start pretending that our mental fantasies were true.  If cats bothered to think about us, they would say we were crazy.  They would be right, of course.  You can tell because we have Bast, the cat Goddess, and cats don’t.  At least I don’t think they believe in Her.  Maybe cats in Egypt do.  I’ll ask Ginger and Emmie when they come back for dinner and let you know.

You can see in this picture, that his front paws are deformed and his front legs are a little shorter than they should be.  Sometimes he limps because his right paw hurts.  But he seems very happy.  He brushed against me today and let me touch the tip of his tail.  He talks to me all the time and we are getting to be better friends.  He’s still jumpy but he’s a lot more comfortable around me now.  He’s a nice cat. He still goes after Emmie and she’s afraid of him.  She outweighs him by a lot but he’s the boss.