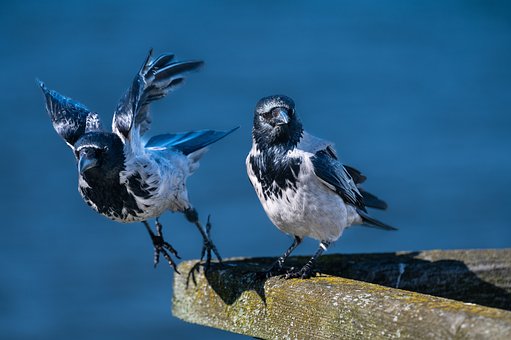 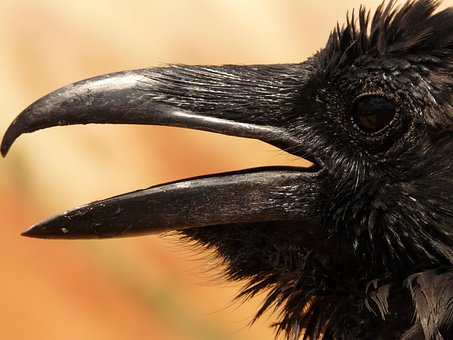 Crows are messengers.  Super intelligent, sleek and beautiful,  It’s always wise to listen to what they have to say.

This is what love is all about…

Ginger Snap and the crows…4 pictures

I was out feeding the cats when the triplets landed in the trees cawing and bobbing at me. I was petting Emily and they started landing.  Ginger was eating dry food but moved away when the crows decided to eat.  She sat there for a very long time watching them.  Then she wanted to go back to her dish so she cautiously rose and circled around them and started eating.

As soon as I went inside Emily went into her box.  She doesn’t play by the crows.  A squirrel joined the crows and they were all happy.

It’s kind of amazing, actually.  Did the best I could with the pictures, since I can’t get too close to the window.

Two crows and a cat…

Two of the three crows who were here and the cat (upper right bleached out by the sun), didn’t seem to bother them at all.  The crows landed and started eating.  The cat walked out from under a bush and sat at the edge of the patio, then walked to the food dish.  The crows watched her but didn’t fly away.

This a bad picture but I had to stand very far from the window because crows notice everything and take off if they see movement.  Sorry about that but it’s the best I could do.  Everyone is here all the time and I think the crows recognize the cat.  They are okay with me if I’m in the yard but they don’t like movement in the window.  They sit in the tree and wait for me to put cat food and peanuts out for them.  They caw and call me if I’m late.  It’s very exiting to have them back (they are the three babies who were here in the summer).

It was a dark and rainy night.  He didn’t like delivering messages when it was so late, everyone was asleep, or well on their way to dreamland, which meant that he would have to tap on a window for some time, before anyone answered.  But the message was important and besides, he was in love with Lily and didn’t want to miss an opportunity to see her.

He arrived at her balcony, flew to her window, and shook out his feathers.  He preened for a moment or two, then tapped.   He saw the candlelight immediately.  Fortunately, he had arrived before she sought her bed.  The window opened and she waved him inside.

“Come in, come in, you’ll catch your death out there,” she said, shutting the window behind him.

He hopped to the fireplace and stood on the bricks, drying his wings.  He cawed softly and she sat next to him, her long, unbound, hair falling around her shoulders.

He fluttered one more time, rubbed his beak on a brick and stared up at Lily.  His heart thudded in his chest.  She was beautiful,  she was his mate.  If she would only remember.

“My lovely one, what is wrong?” she asked, calling him closer.

He cawed and tried to speak, just as Lilly ran her pale hand down his back.  The crow trembled under her touch and leaned against her, his sadness obvious.

“My sweet one, what has happened?”

Just kiss me he thought, just one kiss.

“You are so beautiful,” said Lily, sighing.  “It pains me to see you so unhappy.”

“Here,” she said happily.  “This will make it better.”  Then she bent over the crow and kissed him on top of his head.

Lily was surprised when she looked down and saw her talons.  She held out a wing and flew to the window where she saw her image reflected back to her.  She was a lovely black crow.  She had a strong beak and blue black feathers.  As soon as the spell had been broken she remembered the curse and the horrible wizard who turned her into a human, taking her away from her love, from her murder of crows, from her family.

“I love you as well,” she cawed, bobbing up and down.

The door opened and the wizard walked in, his hands in fists.  He saw the two birds and began to scream.  “You’ll never have her,” he yelled.  “Never.”

The crows flew past him, out the open door to freedom.

Two days later the wizard was found in the middle of the road, face down in a puddle.  His eyes were missing and his throat and been torn out.   It wasn’t long after that until the people of the town realized that all of the crows were gone.

The message the crow was to have been delivered was a simple one.  Humans, even wizards, should remember not to mess with Mother Nature or true love.

Mom and her wee one… (3 photographs)

The crows have been back but I have not been able to get any photographs.  I’m standing far from the window and zooming in so these are a bit fuzzy.  Any movement causes them to fly so I did the best I could.  Mom is on the birdbath.  The baby still wants to be fed but she has decided it’s time for everyone to to fend for themselves.

The mom decided to dig between the rocks for some tasty bits so she spent quite a it of time enjoying breakfast.

Almost no pictures in this book. A couple of drawings and that’s about it. The book is about the language of crows, their relationships and tales by the author.