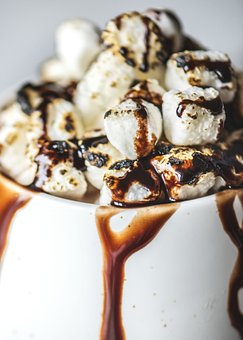 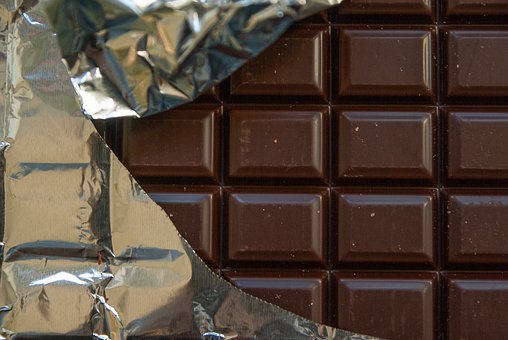 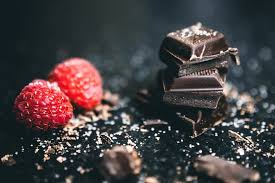 From: Don, at A PONDERING MIND

Hi.  My name is Georgiann and I’m a chocaholic.

They don’t have weekly meetings for chocaholics and the reason is simple.  All the addicts would refuse to go to a place that didn’t have chocolate treats after the meeting.

Chocolate is a lovely dark creamy drug that the people around me better hope never becomes illegal, or impossible to get.  I’m a happy person, in spite of the things I usually write about.  But all bets are off if I don’t have chocolate everyday, sometimes many times a day.  Without chocolate, my world turns very dark and bad thoughts begin to circle, like vultures, waiting for my dead body to hit the ground.

Really, when you think about it, as sucky as life can be, if you can lock yourself away now and then, with a ton of books, a lovely cup of tea, a cat, and DARK chocolate, you can pretty much live through anything.  Once you stop staring at the wall, that is.

Some people like cake, coffee or otherwise.  Some like fancy desserts, like cream puffs and custards, flan, or things that are set on fire.  I love blueberry and cherry pie, especially with ice cream but really, I’m a cookie kind of woman.  I like them WELL DONE, maybe a little burnt, crisp and dry.  I like Milano’s and the good news is that the Double Dark Chocolate Milano’s have fewer calories than the regular ones, which goes to prove that if there is a supreme being SHE is definitely a chocaholic!

I’m not into raisins or carob.  Nothing too healthy.  If it’s not chocolate, or if the cookie doesn’t have chocolate chips IN it, it’s a waste of my time and easy to turn down.  Angel Food cake? Yeah, don’t make me laugh, although you can squish it between your fingers and make into shapes.  You can also pour chocolate syrup over it and then it’s at least an option, if nothing else is available.

If it’s not called Death by Chocolate, just walk on by.  Okay, I must say that once every century I’ll grab a handful of “Nilla Wafers” but that’s about it.  I just look at blond things laying on a plate, or worse, ginger snaps, and wonder, “What were they THINKING?”  Anything pumpkin makes me close my eyes and try to control my breathing.  I’d rather drink applesauce directly from the bottle before I’d eat something lime or oatmealllllly.  Argggg.  But eclairs from Paris…be still my beating heart.  Pretty much any pastry from Paris can make me swoon, but the eclairs…OMG!  It’s worth the trip just to get more of them…tiny, slender perfection.  The brownies weren’t too shabby either and I won’t even go into the bread because that’s a whole other passionate love affair.  Sigh.

I do eat a certain kind of cookie until I hate it, then move on to another one and do the same thing.  One day, I’ll take a bite and then get into the car and hunt for something else that I will eat day in and day out, until I can’t stand to think about them.  I bought fig bars, in honor of my mother, who loved them.  The package is now a solid artifact in my kitchen cabinet.

I just had a piece of Vegan chocolate cake from the Chicago Diner (sold at Whole Foods).  Fantastic restaurant, by the way.  I wrote about it before.  Anyway, I had it with yummy vanilla ice cream…so it was good but I was talking on the phone and reading when I was eating it so, as you may have guessed, some of the magic was lost due to multitasking.  It was delicious but not as good as IKEA’s or Portillo’s.

I DO NOT like Milk Chocolate and can’t imagine why it exists, except for the fact that millions of other people love it.  I like DARK, bitter, or semi-sweet CHOCOLATE.  That pale imitation stuff just doesn’t do it for me.  My aunt Jo loved White Bark.  White chocolate?  Travesty.

There’s an ice cream store in Geneva, IL and it sells Dark Bitter Chocolate ice cream.  It has CHUNKS of bitter chocolate sticking out of it and it’s exceptionally high quality ice cream, rich and creamy.  I get it every time I’m there.  Deb tried a tiny taste and made a truly awful face.  She didn’t know how I could eat it.  I didn’t know how she could not.

A couple more thing.  I love Gelato, especially from Venice.  And I love a scoop of strawberry with a scoop of chocolate from 31 Flavors.  Together they are amazing.  I also like Dove strawberry sorbet chocolate covered ice cream bars.  Oh YEAH!

I don’t actually care much about real food.  I like bread and chocolate.  Maybe PB & J too, but that’s pretty much it.  The occasional waffle or pancake, of course, but the pancakes must have chocolate chips in them, or what good are they.  I’ve had them with chips, but not nearly enough of them, so I just picked them out and ate them…then threw the actual pancakes away, I mean why waste calories on plain things?  Right?

Pudding is okay, as long as it’s dark chocolate and I like popsicles and fudge bars.  I’ve eaten Lemon bars.  I like tart, bitter and sour.  Don’t like sweet.  Hershey Kisses…not in a million years.  Flowers on birthday cakes, no way.  Not into caramels, or candy, just not that interesting, although I did go through a state where I ate Peanut M & M’s for awhile, but I got over it and now I don’t even think about eating them.  Never did like candy.  However, like Dumbledore, a lemon drop, now and then, not a bad idea.

I’d like to think everyone is like me but I fear that most people watch what they eat.  They may even have wee scales in their kitchens to measure their food.  I indulge myself and try and get every drop of chocolate out of life that I can.  I mean, think about it, I have no idea what’s waiting for me on the other side.  What if chocolate is hard to come by where I’m going?  It might just melt before I could eat it.  And if there’s nothing on the other side, I’m doing what I can to have fun while I’m here.  So, get rid of the coffee and pass the hot chocolate because I sure am having fun!  I did eat a salad with the cake.  I like salads because I like tomatoes, mandarine oranges and black olives.  Not alone, but with leaves.