The party has begun…Amanda and her unicycle are now on stage.

Amanda is riding her unicycle to JINGLE BELLS.  She’s doing spins and tricks and has the chickles on their feet, flapping their wings with joy.  Everyone is loving her routine.  She is thrilled and plans ons starting a unicycle club in January. 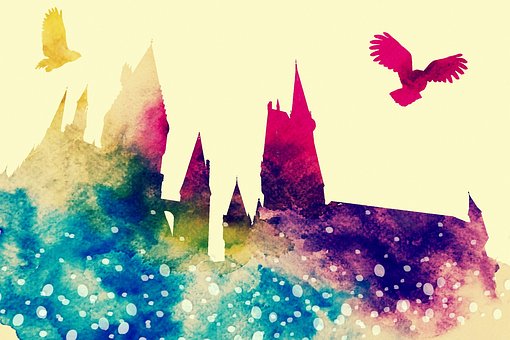 “I want to go to Hogwarts,” she said, to her mother.

“I don’t blame you.  I’d like to go to Hogwarts to,” she sighed.  “Unfortunately, Hogwarts isn’t a real place, so you’ll just have to go to a regular school.”

Her mother smiled at her.  “Look,” she said, putting the hot cookie sheet on top of the stove, “I would send you there if I could, but it’s not a real place.”

“You said I could do anything, or be anything, and I want to go there and be myself.”

“I think the cookies are cool enough to eat,” said her mother, putting three of them on a napkin.

“Maybe we can buy Hogwarts on Amazon.”

“What!” said her mother, laughing.

“Even they can’t sell what doesn’t exist.”

“Well, I guess it’s up to me then,” said Amanda, huffing a bit.  “If you want something done, do it yourself, right?  Isn’t that what you always told me?

“I’m going to open a Hogwarts.”

“There are no mountains in the backyard,” said her mother, taking a bite out of a cookie.

“I’m going to build my own mountain.”

“Good luck with that,” said her mother.

“What do you mean?” asked Amanda.

“I mean the job is a lot bigger than you think.”

“Ah. Not if you use magic,” agreed her mother.

“The castle could be tricky.”

“Not as tricky as the mountain,” said her mother, reaching for another cookie.  “These are delicious,” she whispered.

“Neville is an actor who wore fake teeth.”

“Why do grownups lie to children?” asked Amanda. “Why do they show us schools we can’t go to, and show us people who aren’t real?”

Her mother shrugged.  “Life is like that for grownups too.  It’s entertainment.  It’s supposed to be fun.”

“It’s not fun.  It’s mean.  How can I ever be satisfied with a regular schools when I could go to Hogwarts?”

“Look, Baby Girl,” said her mother, “movies aren’t real, they’re just for fun and something to do so people don’t jump off of bridges or high ledges.  Even grownups want to live in the Harry Potter books.  We all want magic.  Not the fake stuff, but the real stuff.  We all want owls to take our letters to people, we want all of it.”

“No one should like him, Amanda.  He did nothing to help Harry from being abused by his family for all those years.  He was as abusive and hateful as they were.  But there’s Flitwick, Lupin,  and all the others.”

“Do you think magic’s real?”

“Definitely.  I just don’t think we can use it here.  We’d be extinct if we could.”

“But you know what I can do,” said Amanda softly.

“Yes, Love.  And you know what I can do, but neither one of us can tell anyone else.  Grandmother knows because she can do things too but no one can ever know.”

Amanda nodded, grabbed a handful of cookies and said, “I’m going to my room to figure out how to build a mountain.”

“Let me know if you need any help.  Oh, and remember, our yard is very small, so you need to build it on a different spot.”

“Okay,” she said, skipping away.

“Hello mother.  Yes, I told her.  She’s going to build her own school. Yes, I know she could do it.  Where are you?  What are you doing at Hogwarts?

Amanda…a very short story about loving what you do…

When I was a little girl, my mom said, “You like animals so much, try to do something with them when you’re older.  That way you’ll love going to work every day.”

My mom was right, although I don’t think what I ended up doing, is exactly what she had in mind.  She didn’t tell me to travel the universe on my zebra, seeking out new and exotic beings, in order to make sure they were well cared for.  She was also right about doing what you love.  I love my work.  It makes me happy, every single day.