Archive for the ‘poetry by animals at The Coop’ Category

Last night was very exciting.  The sing-a-long lasted for over an hour.  The entertainment was marvelous.  The tumblers did a wonderful job and the trio sang IMAGINE, by John Lennon and I WANT IT ALL, by Queen.  They sang songs about baby chicks, lambs  and bunnies, rhino’s and mice.  It was a lovely experience.

The poets, as always, where a big hit.  Honey, Lois, Lester and The Flying Chicklet were on stage and these are their poems.

WINGS
by the Flying Chicklet

After the reading, Lois told everyone they could see her Double Helix in the Science Lab, if they felt like walking over there.

The poets, there were ten of them, were applauded loudly and there were ear-splitting peeps, chirps and whinnies.

The dancing started, once the seats were pushed against the walls.

Chicklets, poetry by animals at The Coop

The Poetry Club did an outstanding job… 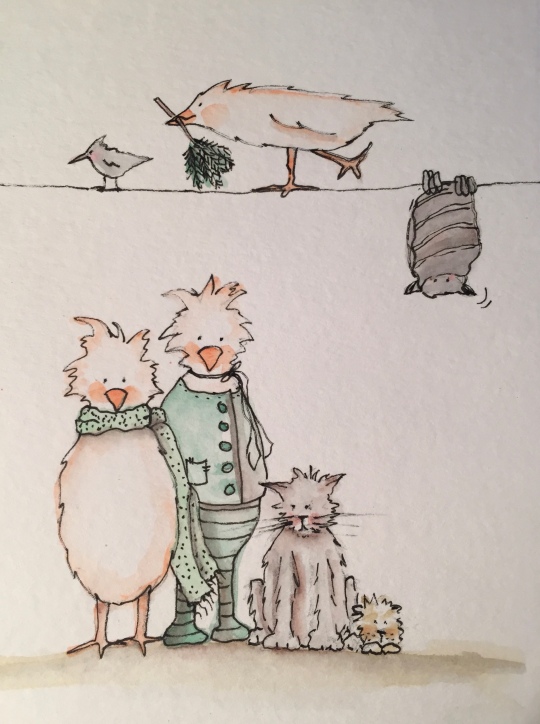 The Poetry Club was a huge hit at the Chickmas Eve party.  They are always one of the highlights but this time they had tightrope walkers in the background, so everyone was thrilled.

Kitty Kitty’s poem was about stray and feral cats.  Here’s what he said…

A lot of the chicklets were crying after he read his poem.  They’ve seen how difficult life is for those who live on the street and their hearts were broken because they can’t help everyone.  Kitty Kitty was a feral cat who was hit by a car.  The chicklets found him and brought him to The Coop, where he learned what kindness was.  He was afraid at first, and it took him awhile to trust anyone, but the Warming Bunnies were there when he woke up and the chicklets sang to him and told him stories about the brave cats who lived at The Coop.  The cats visited him everyday and finally he slept through the night and started eating.  When he was better, the chicklets asked him to stay with them forever and he said that he would.  Now, he’s on several committees and an important member of the Poetry Club.

Jason, the Guinea Pig was found on the side of the road, where the people he lived with dumped him, when they no longer wanted him.  The chicklets found him and brought him home.  He was healthy, so they took him for a Gondola ride on the Duck Pond and gave him a lot of cookies.  Here’s his poem.

Everyone applauded and flapped their wings, when Jason finished his poem.  He’s such a happy being and he’s a fabulous poet.  Everyone loves him and he’s on may committees, including the weekly paper, where he has his own column.

Jade, who always wears green, was next.  Here is her poem.

There was a moment of silence for all the animals who have been tortured and slaughter by humans.  There was no applause but there were a few sad peeps and a wing flap.

Springtime was next.  He was rescued with his siblings and mother, from a Factory Farm.  Here’s his poem.

Everyone was cheering and crying, even the hens.  Someone started passing cookies to everyone, so they would calm down.  The rhinos were sobbing, along with everyone else, not for Springtime’s gratitude, but for those they were unable to save.  Those at The Coop take rescuing others from humans their main goal in life.  The cookies helped and then they sat down and were ready for Bats.

Bats and his friends roost in a cave at the back of the property.  They lost their home when humans visited and raised the temperature in their cave, and bats started to die.  The chicklets told the bats to come and live with them, so they did.

The chicklets were so happy.  The dogs were barking, the horses were stamping their feet, and the DJ put on some Chickmas music.  Music that was written by the Music Committee.

The gray bird and Sandra were not reading poems they were simply walking the wire.

Thank you for taking the time to read their work.  The chicklets send Chickmas peeps, chirps, and wing flaps.  They also ask for your help.  Help strays and Feral cats.  Please don’t eat animals, or harm them in any way.  They send their thanks.  So do I.

Oops…Gray Bird just said she has a poem.

we
pass
violence
from
one
generation
to
the
next

and
then
we
wonder
why
the
violence
never
ends

Animals/Birds, Philosophy of life and other good stuff, poetry by animals at The Coop, violence

I saw the title of a TED talk today, about how CLIMATE CHANGE ISN’T FAIR.  I guess the speaker was going to talk about how rich countries can fight what’s happening and the people in  poor countries will starve.  I have seen predictions from still others who say that there will be water and food wars, with richer countries being overtaken by those who have no food.  There will be wars in the most literal sense of the word.  But I didn’t watch her talk, the synopsis told me enough.

Life is an accident.  There are no guarantees.  Color, wealth, education, is often a simply the joining of egg and sperm.  Many people are born into the slums, huts, apartments, houses and castles. Prince Charles didn’t do a single thing to be Prince Charles.  It’s normally not something one can “attain” through hard work and by eating your veggies.  Wealth has the ability to keep others down and “that’s not fair.”  It’s not fair that men rape and beat women and children, or that many people of color can’t get jobs, education, or decent housing.

Nothing in life is fair.  It’s the silliest thing I have seen in a long time, to give a lecture on how climate change, ONE MORE THING WE ARE DOING TO OURSELVES, isn’t fair to people who are already poverty stricken or will be, as the water continues to rise.  Does ANYONE think that life is supposed to be fair?  Again, what does fair MEAN?  Here’s what the dictionary tells us:

fair 1 |fe(ə)r|
adjective
1 in accordance with the rules or standards; legitimate: the group has achieved fair and equal representation for all its members.
• just or appropriate in the circumstances: to be fair, this subject poses special problems.
• archaic (of a means or procedure) gentle; not violent.
• Baseball (of a batted ball) within the field of play marked by the first and third baselines.
• Baseball pertaining to this part of the field: the ball was hit into fair territory.
2 (of hair or complexion) light; blond.
• (of a person) having such a complexion or hair.
3 considerable though not outstanding in size or amount: he did a fair bit of coaching.
• moderately good though not outstandingly so: he believes he has a fair chance of success.
4 (of weather) fine and dry.
• (of the wind) favorable: they set sail with a fair wind.
5 archaic beautiful: attractive: the fairest of her daughters.
• (of words, a speech, or a promise) false, despite being initially attractive or pleasing; specious.
adverb
1 without cheating or trying to achieve unjust advantage: no one could say he played fair.
2 [ as submodifier ] dialect to a high degree: she’ll be fair delighted to see you.
noun archaic
a beautiful woman.

Did that help you?  “without cheating or trying to achieve unjust advantage….”  LOLOLOL  Oh, sorry, did I just laugh out loud.  And I love the fair daughter and beautiful woman part.  No fair or beautiful sons, I guess. That’s soooo not fair.

Look, PEOPLE, usually rich, older, white males, decide what’s FAIR.  They always have.  We make this garbage up. Nothing is fair.  It just is what it is.  Minimum wage is decided by those same horrific men who hold people hostage and intentionally keep them in poverty.  There’s NO REASON FOR IT, other than the fact that they want poor people so they have workers, no competition AND MORE FOR THEMSELVES.  Yeah, well.  if you’re waiting for your FAIR share, don’t hold your breath.  Climate change isn’t fair…that just cracks me up.  Just curious, how many countries do you think would help America if She was in trouble?  I think there would be parties everywhere in the world, but maybe that’s just me.  Once people found out we couldn’t support their countries anymore or ARM them, so they could KILL us later, they would have no need to smile our way any longer.

Bottom line…the dictionary doesn’t have a good definition of what fair means because it’s a word that is absolutely MEANINGLESS!  Hey, I’m just sayin’.

Philosophy of life and other good stuff, poetry by animals at The Coop, Rants & Raves, Thoughts

The after breakfast poetry session has begun.  Juliet and Sage were first up and here are their words.

LOVE IS FOR EVERYONE by Juliet

love is for
birds, cows and bunnies
it’s for lizards, snakes
and horses

love is for
lambs, crickets and mice
it’s for dogs, cats
and chicklets

love is for
wild animals, turtles and frogs
it’s for worms, ants
and goats

valentine’s day is for hearts
please have one for animals

From the fabulous: Wordifull Melanie

A poem for the chicklet poets 🙂

Thank you so much Melanie.  I love this and the chicklets are all jumping up and down peeping and chirping their thanks.  ❤

There is SO much I want to say about this issue.  But I’m too angry to write anything that would be anything BUT SCREAMING AT THE TOP OF MY LUNGS.

Blogger Sarah from: https://anglosaxonceltcreates.wordpress.com found this important link…
January 30, 2015 at 12:09 pm (Edit)
Here’s a link to the petition: https://www.change.org/p/tony-abbott-and-michaelia-cash-protect-australian-girls-from-female-genital-mutilation

Thank you for this link Sara.

poetry by animals at The Coop, TED

Guilt is only good for one thing…getting people to do what you want them to do by manipulating them in ways that make them feel BAD.

It doesn’t matter who tries to make you feel guilty.  Do not buy into it.  Live your own life.  If people are unhappy with YOUR choices, that’s THEIR problem, not yours.

Guilt is a nasty and hateful weapon used against others so that people can have their own way.  Walk away.

Philosophy of life and other good stuff, poetry by animals at The Coop, Thoughts

FIGHTING AND KILLING for PEACE can never makes sense…

This soldier is a child’s TOY.  We TEACH VIOLENCE and WAR and don’t often think about it.  Children are around when the news is on, when people talk…they hear and see violence as a way of life.  It’s on TV, it’s in their SCHOOLS, on the playgrounds.  It’s everywhere.

Art, Peace, Philosophy of life and other good stuff, poetry by animals at The Coop, Thoughts

Time is running short, so there was a poetry reading early this morning.  Clarise, an activist duck who works to stop the pollution and poisoning of water everywhere, was up and did a wonderful job.  Everyone has a lot to do for the party but things are under control and a good time is being had by all. 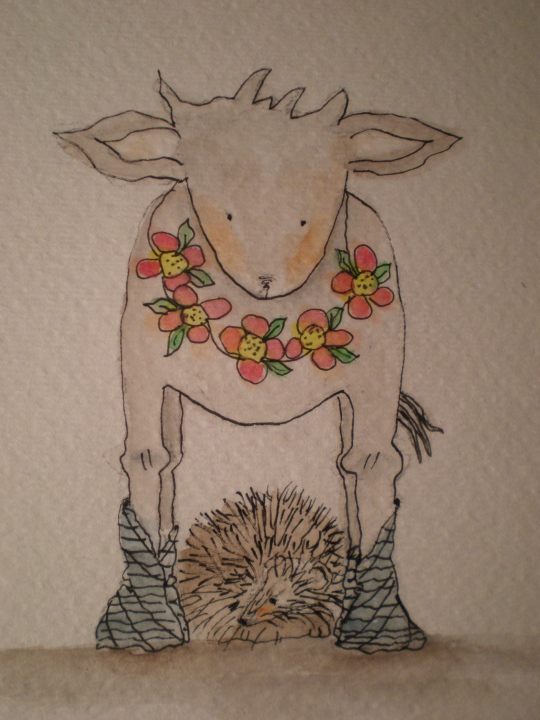 Billy the Kid and his friend Thomas, the hedgehog were on stage tonight.  The crowd loved them.  Well, Thomas didn’t do anything but they loved him just the same.  The paper flowers were made by the Paper Flower Committee, so thank you to chicklets Marie, Gerald and Sunny.

and
so
do
hedgehogs

thank
you
very
much