Archive for the ‘Miles and Lexi’ Category

“Then what’s the problem?”

“What else would we do?” she asked, taking a deep breath.  “I love this stuff.”

Then she was screaming and hacking away at the Watchers with a mad kind of glee.  She flew through the air, spinning and slashing.  KiKi followed her, biting and ripping as she moved through the crowd. Miles, flushed with excitement, was practically dancing though the bodies as they hit the ground.  His hands were moving so fast they were almost a blur.  The muscles in his arms were hard and unyielding.  Lexi, looked as if she were having the time of her life, smiling and killing anyone standing.   Within five minutes the street was a filled with beheaded Watchers.

Lexi and Miles stared at each other, a wicked grin on their faces.  KiKi jumped onto Lexi’s shoulder, mewed, head butted her neck, then started to wash her face with her paw.

“I’m hungry,” said Miles, wiping the blood from his forehead.  “How about you and KiKi?”

“Always,” she said.  “Will they ever stop coming for us?”

“You’re hurt,” he said, frowning as he looked at the gash running down her leg.

“Not exactly,” he said, looking away from her.

“It could scramble your brain.”

“You’re telling me now?  And the thing behind you isn’t dead, in case you’re interested.”

Miles turned and quickly parted the wounded Watcher’s head from his body.  “We need to get powder for your leg.”

“What kind of powder?”

“It’s a complicated mixture of herbs and magical things but I don’t have all the ingredients at my fingertips, so we need to see a chemist I know.”

“Not that far,” he said, moving through the dead  bodies to get to her.

KiKi dug in her claws and held on.

“Poison won’t hurt me she said, as they ran.”

An arrow flew past her head, just as his wings opened.  KiKi walked down Lexi’s body and curled into her lap while hissing at the shooter.

“Who’s going all medieval on our collective ass?”

“The Head Watchers, who control the Watchers.”

“What is it with those guys?”

“We’re almost there,” he said.

“I love the wings.  They’re glowing.”

“No, they aren’t.  You’re starting to hallucinate.”

“I don’t hallucinate, tell him KiKi.”

KiKi bit him in the hand.

The cat backed off and licked Lexi’s chin.

“That’s because the Chemist’s is on fire.”

“The pizza was good,” said Miles.  “I haven’t had pizza in a very long time.”

“I eat pizza at least once a week,” she said, running her hands through her short, spiky, blond hair.  “Can’t imagine doing anything else.  Are you here for a visit or business?  You never answered me.”

“Where are you staying?”

“Nowhere.  I should be finished and gone by tonight.”

“Oh.  Well, that’s nice, I suppose.  Maybe you can give me a call next time you’re in town and we can get together for another pizza.”

“Why do you have wings?”

“You mean born that way…like it’s a birth defect, or enhancement?”

“You have no idea,” he chuckled.  “However, I must admit that you aren’t like the other females I know either.”

“What’s with the floating?”

“Do you have any siblings?”

“It is.  She’s black and very clever.  You can meet her if you like, I live right over there.”

“Maybe next time,” he said softly.

“If I finish working early I might be able to stop by and see her,” he added, after hearing the disappointment in her voice.

“I like ice cream,” he said quickly, surprising himself.

“Where do you buy your clothes.  A vintage shop?  A costume store?”

“This was made by a weaver I know.”

“The person does great work.”

An electric guitar riff suddenly filled the air, followed by the beginning of, BAD TO THE BONE, and Miles stopped floating.  “I have to go to work,” he said, looking at his oddly shaped cell phone.  “Perhaps I’ll see you later.  If not, I’ll contact you next time I’m in town.”

“You don’t have my number.”

“Well have fun at work,” she said.

Laughter filled the air and he was gone. 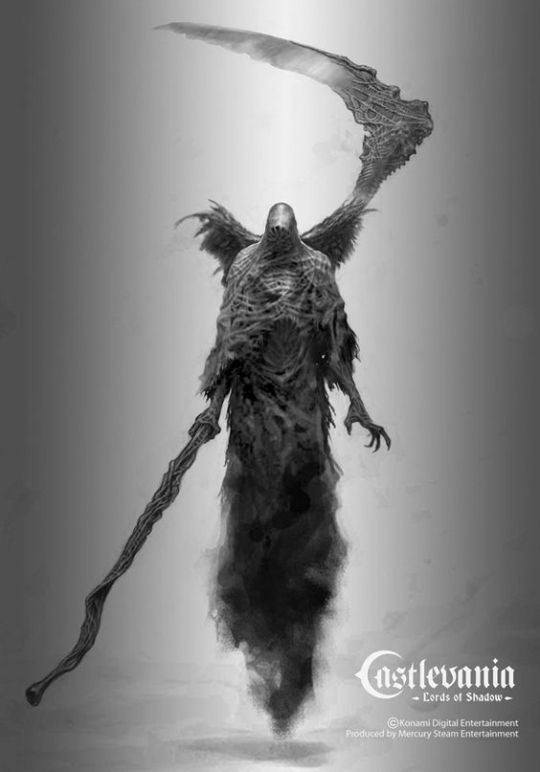 This gorgeous concept art is by Diego Gisbert Llorens/on Pinterest

“You’re not from around here, are you,” she said.

“What gave me away?”

“The floating, for one thing.  Then the long hooded robe, the claw like hands and, of course, the very cool scythe.”

“Oh,” he snickered.  “I thought you were going to say it had something to do with the fact that I have wings.”

“Well, sure, the wings are definitely a factor.”

“You think my scythe is cool?”

“You wouldn’t know him, believe me.”

“I might.  I know a lot of artists who work with metal.”

“Trust me,” he said softly.

“Wanna get a pizza?”

“Me too,” she said smiling.

“Thin or deep dish?” he asked.

“Thin, with maybe a bit of spinach and a few mushrooms, to party it up.”

“I know a place,” she said, starting to walk away.

“I know a place too, but there’s no pizza there.”

“This is a strange day,” he said, floating next to her.

“Live here long enough and you won’t think so,” she laughed.  “Hey, where are you from?”

“I’ll get this one and you can pay next time.”

“Next time?” he asked, taken back.

“Okay,” he said, trying not to stare at his new friend.

Everything is relative.  You just never know what’s gonna happen next.