Archive for the ‘Fairy tale’ Category

“Mom, are there any fairy tales about wicked stepbrothers?”

“No, sweetie, there are not.  There aren’t any stories about evil stepfathers, or stories where the father dies, either, not really.  Men are never considered wicked, no matter what they do, or who they neglect.  Women, when written by men, are evil and wicked because that’s what they think of adult women.  They’re afraid of us.””

“I think I’m going to be a writer when I get bigger.  I’m going to write stories that tell the truth about stepmothers and sisters.  And maybe boys won’t think it’s funny when the girls rescue the them either.  II’m sick of those old stories where girls can’t take care of themselves and they never have any friends either.  And why are they always waiting for some prince?  How many princes are there?  Not enough for all the girls, that’s for sure, and who cares anyway.  Some boy kisses a girl in a coma and she marries him, without even knowing who he is.  How stupid is that? And usually the only thing girls need to be rescued from are boys.  If they just left us alone, no rescuing would be necessary.”

“I think you’re already a writer.   You don’t have to wait until you’re older,” said her mother.”

“Okay.  I’m going upstairs and write something.  Something  where stepsisters love each other and have to save some boys.”

“I’ll call you when lunch is ready.”

“What did you do to your hair?”

“I cut it off,” she said, staring at her stepmother.

“How will you get out of the tower?”

“The one I’m supposed to lock you into.”

“Why would you lock me in a tower?”

“I’m not sure, Rapunzel.  I think it’s  just the way the story is supposed to go.”

“I think so too,” said her stepmother, tapping her foot.  “It seems completely unnecessary.”

Her stepmother shrugged.  “Men like things like that.  If you’re locked in a tower, they can rescue you and everything.”

Her stepmother nodded.  “I know.”

“Why don’t we just go out to lunch instead?” asked Rapunzel, hopefully.

Her stepmother thought for a moment, then said, “I have a better idea.  Why don’t we lock your father in the tower instead!”

Rapunzel thought that was the best idea anyone every had in the history of the world..

So the two women brought Rapunzel’s father to the tower, under the pretense of leaving his daughter behind.  But once there, the women pushed him through the door, locked it, put a board across the door, then shoved a large piece of furniture against that.  When they were finished, they ran down the stairs laughing and dancing, knowing they were both finally free for the very first time.

The father was never able to grow his hair long enough to reach the ground.   In fact, he ended up being quite bald.  It’s not important, of course, since no one was interested in rescuing him, anyway.

The women, as you may have already guessed,, lived happily ever after.

Fairy tales, and their endings, always depend on who’s writing them. 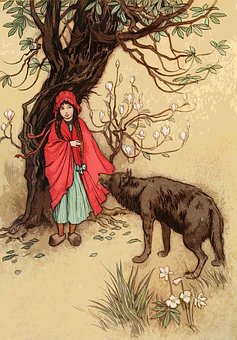 “I think your grandmother’s in danger,” said the wolf.  “Some guy with an axe has been stomping through the woods.  He smells like death.  We need to hurry.”

The pair ran through the woods, until the wolf skidded to a halt.  “He’s up ahead.” he whispered.  “Get behind me.”

Red moved behind the wolf and crouched down. The wolf growled deep in his throat. His ears were flat against his head and his lip was curled back, over his teeth.

The man broke through the trees and said, “And what do we have here?”

Red kept her hand on her friend’s back.  “Stay down,” she said, softly.

“Ah, a pretty little girl in a red cape.  You look tasty enough,” he said, reaching for her.

Red smiled, pulled a glock 22, semi automatic, out of her basket and shot the hunter once between the eyes and and once through the heart.

“Nice,” said the wolf, getting to his feet.  “You always have to double tap them, to make sure they stay down.  That’s the second one this summer.”

“Well, we can’t have hunters killing animals and my grandmother, can we?” she sighed, putting in a new clip. “What kind of friend and granddaughter would I be if I let that happen?”

“We do what we have to do,” said the wolf, shaking out his fur.  “You ready to go see her?  I think she made cupcakes.”