A short story about weirdness… 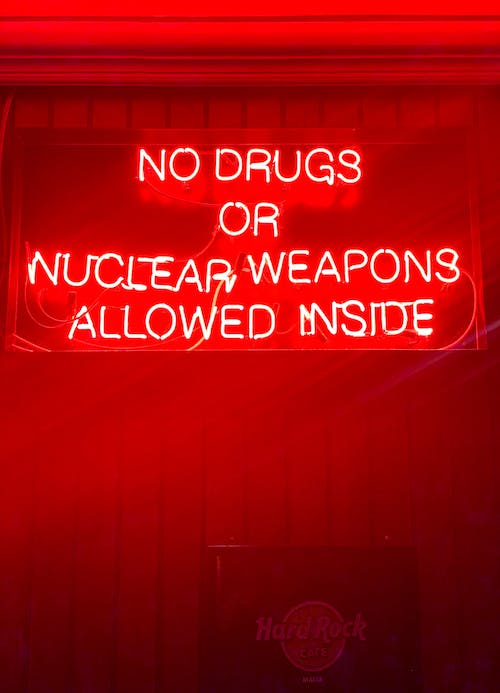 “You again?” muttered the guy behind the counter.  “You’ve been here before.”

“You are uncooperative and weird, that’s why I remember you.”

“I can be both of those things,” she said, truthfully.  “I think everyone can be.”

“What is it this time?” he sighed, staring at her.

“I have drugs and a nuclear weapon.”

“Then you can’t come inside.”

“I already am inside,” she said, looking around.  “You’re inside too.  Surely you know that.”

“This is not inside.  This is the screening area, the place you’re checked before you get to go inside.  This is where we stop people from entering the bar, if they have drugs or nuclear weapons.”

“The drugs and weapons didn’t come here by themselves.  YOU brought them, so you cannot go inside, and that’s final.”

“Can the drugs and weapons go in by themselves?”

“I just want to go inside and dance a little.”

“You could have gone inside if you hadn’t brought drugs and a nuclear weapon with you.  So, go away and try again some other time, when you don’t have those things on your person.”

“I do not want to see them.  Not for any reason.  Now, please leave this place and don’t come back until you are willing to meet the entrance standards.  And you don’t have a nuclear weapon with you, because they weigh a ton and they are huge.”

“That’s what I thought,” he said, running his hand through his hair.  “Amazon doesn’t sell nuclear weapons.”

“Okay, but remember, you asked,” she said, pulling a small nuclear device out of her backpack.

“That looks like a nuclear device,” he said.  “However, it’s made out of Lego’s.”

“Oh, sorry,” she said, shoving her hand back into her back pack.  “Wrong one.  That was the prototype.”

“What kind of drugs do you have?”

She put a bottle of aspirin on the counter.

“These are aspirins,” he said, looking at the half filled bottle.

“I know.  But they are also drugs, purchased at a drugstore.”

She plopped the small nuclear bomb on the counter next to the aspirin.  “There.  That’s the nuclear device.”

“I thought you said you got it on Amazon.”

“I got some of the parts on Amazon.  You’d be surprised what you can make out of the insides of radios and appliances.”

“Just a little one and it can’t go off.  I just wanted to make it, that’s all.  It’s not finished or anything.”

“Is that the truth?”

“Yes,” she said, holding up her hand.  “The whole truth and nothing but the truth, so help me NASA.  The bomb has a gooey chocolate center, so you don’t have to worry.  And, to be perfectly honest,  after meeting you last time I was here, I wanted to see you again.  I thought this was a way to get your attention.”

“You could have just said that in the first place.”

“Can I have the aspirins back, please?”

“Sure,” he said, accidentally on purpose touching her hand, as she reached for them.

“You want to go out sometime?” she asked, softly.

“No kidding,” he said.  “You’re pretty creative, that’s why I remembered you from last time.”

“You’re welcome.  I get off in an hour.  We can go grab something to eat, if you’re hungry.”

“I’ll meet you out in front,” she said, moving toward the door.  I’ll be in the white Corvette.

“You have a Corvette?”

“A couple of them.  It’s no big deal.  We can talk about it when you’re finished working,” she said smiling.

He smiled back, and watched her leave the room.

The earth has its own way of letting off steam…

From the heart…a poem

Comments on: "A short story about weirdness…" (6)