The green bookstalls, filled with things French people would never buy, but tourists, hungrily purchased and shoved into their bags.

I took the chicklets to Paris a couple of times and they really enjoyed it.  I fell in love with it, of course, as so many people do.  I don’t actually care if I ever go anywhere else.  I just want to go back to Paris.  I wish it wasn’t so far away.  LOL  I wish a lot of things, since I know the virus won’t allow Paris to be the same open and friendly place it was, last time I was there.  But still, I read about Her, remember, and I dream.

Shakespeare and Company.  The big tree out in front.  The shelves of books, the cat, the typewriters.  There’s a restaurant in part of it now. The billions of words I have digested about Sylvia Beach and her original shop.  Her life, and those who were in it.  It doesn’t matter that it has been run by George, another American (he bought the name and named his daughter Sylvia, for Beach), for years, and now it’s run by daughter.  It’s an American symbol in the City of Lights.  I loved it.  It’s a business, but the books I’ve read made it so much more.  And that’s what life is.  It’s always about the things in our heads, and when I’ve been in the shop, all those people I read about, came alive and nothing else mattered.

A waiter who worked in the tiny cafe on the corner, right by the hotel, blew kisses at me every time I walked by and drew hearts on my bills, along with love notes, when I ate there.

And flower shops were everywhere.

The BREAD and the CHOCOLATE.  The fresh food, right from the earth, and people with their baskets shopping everyday for what they would need for that evening’s meal.

Wine and cheese shops. Shops dedicated to gloves, or one or two items.  And the people who worked in the shops KNEW EVERYTHING about what they were selling and they concentrated helping people make the best choices.

But don’t touch anything.  The people who work in shops will do that for you.  It’s insulting to touch, or try and help yourself.  Found that out right away.

The gardens, the white buildings, the wide boulevards.  The trees and the ice cream.

The people were wonderful.  Helpful and kind.

One does have to watch for pickpockets and women dressed like little girls, in plaid skirts and white blouses, holding clip boards.  They ask questions, while their partners rob you.  Crimes, and the signs warning you about them, are everywhere.

And sometimes a few Americans horrified me.  Easy to pick them out by the way they were dressed and how loud and even obnoxious some were.  It made me understand why some French people don’t like us.  I didn’t like us.   If they wanted to be treated nicely, with respect and courtesy, they should have acted that way.   Bellowing, being demanding, rude and awful, hurts everyone else.

I think you can skip the Louvre.  I went the first time I was there and was sorry I wasted part of the day.  It’s too crowded and the art…well, the best part was a musician outside, who was playing his cello.  That is wonderful.  Even with a pass and guide, to get in before it opened, wasn’t worth the time.  Although, Winged Victory was gorgeous.

The Love Locks were covered last time I was there.  This is before all the damage happened.

I think the best part about being in Paris is to just walk around and discover things by surprise.  And there are definitely surprises.  Like cool street art. 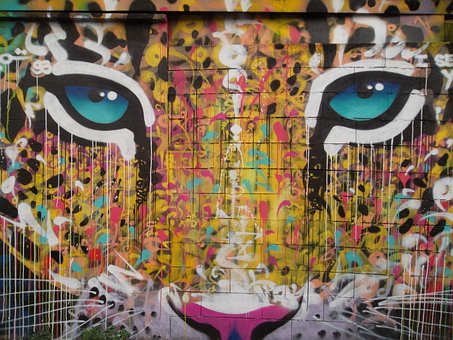 I love that some of the tiny shops are one step away from the curb, their walls rolled back, so the entire shop is wide open.  You just step in and point, or ask, if you can, for whatever you want.

While almost everyone speaks English, it’s good to learn the important words to say in French and aways say Bonjour and Merci.

You must see the Eiffel Tower at night and boat rides are always fun and beautiful, especially if they start in the late afternoon and you are on the water when the sun goes down.  The sculptures on their bridges are gorgeous.

Be prepared to walk…a LOT.

My hairdryer melted, the first time I was there.  I did use a special plug thing but apparently it wasn’t the right one.  It literally melted.  Lesson learned.

It was so wonderful to see crows  everywhere.  I miss them so much.  The bird flu killed ours and they are very slow making a come back.  It’s terrible.  So, I was thrilled to see so many everywhere I went.  They are used to being around people.

The men in Paris are, well, the men are so beautiful, I hardly know what to say.  They are perfectly dressed. Their haircuts, amazing.  As I said, beautiful.  I’ll just stop there.

I know that the things I found attractive and wonderful, are just day to day things for the people who live there, but the house painters I saw and spoke to, on a walk, were dressed in all white.  They were leaning against the building, smoking, and I couldn’t believe how amazing they looked.  No torn T-shirts and baggy jeans, instead, pristine white t-shirts and white cotton pants.  White caps and wow…mini works of art.

The desserts.  OMG  Seriously.  And I do believe they can make ANYTHING AT ALL, out of chocolate.  Some of the chocolate shops looked like high end jewelry stores.  Everything is an art that is taken seriously.  I will never eat another eclair.  After the one’s I had in Paris, ours are like thick, heavy globs of whatever.  Their desserts are so balanced for taste and beauty, it’s hard to describe, although I still like Ding Dongs. 🙂

Well, I’m obviously getting lost in memories of Paris, and I should probably get back to the books sitting in front of me, but I just wanted to tell you that if you can go to Paris, never say, “No.”  And if you go…leave your preconceived ideas behind and just let yourself fall in love with the city.  .