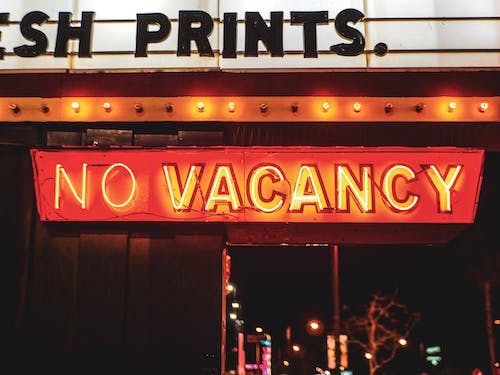 “I don’t understand,” she said, looking at the sign.

“What’s to understand?  The sign says NO VACANCY.  That means you can’t come in.”

“I don’t make the rules,” he said, rubbing his huge belly.

“Whatever,” he said, chewing on his cigar.

“You smell terrible.  What is that thing?”

“Haven’t you ever seen a cigar before?”

“They’ll blow up your ship if you land.”

“This is a tiny, unimportant rock, circling a medium size star and you’re keeping US out?”

“Looks that way,” he said, straightening his newspaper.

“I could erase all of you, with one word.”

She closed the communication link, the ship rose, and the captain said.  “Hit them with an HO*.”

And that’s the day all the humans died.  No comet, no sun turning into a Red Giant, nothing big.  Just a stupid human doing his job and a NO VACANCY sign.  In the end, and more often than not, it’s the things you never even thought of that take you out.

This entry was posted in Short Stories and tagged A very short story, Full up. Bookmark the permalink.