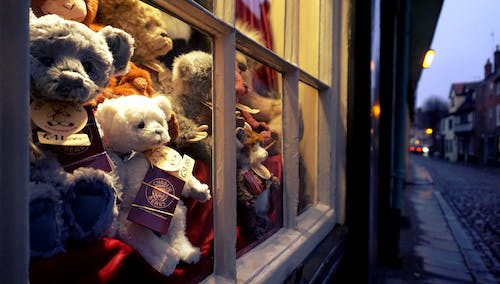 Every evening, after the shop was closed for the night, she looked at the bears through the window.  She named each of them, and treated them like the friends that they were.  She missed the bears who were purchased, but welcomed the newcomers, who took their places.  She didn’t tell anyone that the bears spoke to her.  No one would want to hear that, so she kept it to herself.

“You see,” she said, “I live behind the shop down the street.

Theodore was shocked.  “How do you eat?”

“I get food out of the bins with the cats.”

“Where are you’re parents?” he asked, becoming a bit upset by what he was hearing.

By now all of the bears were concerned about their human friend.

Rosa, a brown bear wearing a white apron with eyelet trim, said that she would ask the owner to make some clothes made for her.

“Oh, don’t go to any trouble on my account,” said the girl.  “I don’t want to cause any inconvenience.”

The bears were very unhappy about their friend’s plight, and it’s never good to have a shop full of unhappy bears.

“Food, clothing, a warm bed and a muffler,” said Theodore.  “She must have those things.”

“The cats keep me warm,” she said.  “I sleep under them.  Or maybe they sleep on top of me. I’m not really sure which way it is.  But I’m warm enough, thank you.”

“That will never do,” said Chester, a small tan bear, wearing a satin vest and glasses.  “No.  absolutely not.  I simply won’t have it.  We will speak to Mr. Jones in the morning.”

“Don’t you have any friends? asked Miss Bell, a medium sized white bear with a bit of lace around her neck.

Chester was getting blustery and very offended.  His glasses almost slid down his nose.  “The girl can live with us,” he said, huffily.  “In the shop.”

“Calm yourself,”  said Mr. Matthews, a yellow bear in blue sweater.  “We will speak to Mr. Jones and see what can be done for our dear friend.”

There was more grumbling, but eventually everyone settled down.

The bears watched her skip away, their hearts aching for the wisp of a child.

“One of us should go and live with her.  Every child needs a bear,”  said a lovely old bear, dressed in a printed dress and pink shoes.  “I will go with her.  She should not be bear-less one more day.”

The next morning, Mr. Jones came downstairs and walked into his shop only to find chaos.  All of his bears were shouting and speaking at once.  He held up his hands and said, “I can’t understand what anyone is saying.  One at a time, PLEASE!”

After he heard their story, he waited for the girl to appear.  She showed up at closing time, when few people were on the street.  The bears had been right.  The child was dirty, dressed in rags, and was as thin as a stick.

Mr. Jones opened the door and smiled.  The girl shrank back.  Mr. Jones held out the bear in the print dress and pink shoes.

“I couldn’t possibly take her.  I have no money and she’s far too beautiful for me.”

Mr. Jones could hardly speak for the lump in his throat and the tears in his eyes.  To think that a child felt that she didn’t deserve to have a bear.  Still he managed to say, “Please, come inside and have a bit of dinner.”

The girl curtseyed and said, “No thank you, sir.  I’m not properly dressed for dinner.”

Mrs. Jones came to the door and said, ” Oh, do come in.  I make all the clothes for the bears and I’m having a problem with a coat I’m sewing for a small black bear.  Maybe you can help me.”

Two cats suddenly appeared at the girls feet.  The girl bent down and caressed them.  “I think these people are okay.  I mean they love bears, so they should be alright.  I’m going to go into the shop but you wait for me right here.  I shouldn’t be long.”

The shop was warm and smelled so good.  It was the first time she was able to see the bears on the other side of the glass, and they were even more wonderful than she had imagined.

Mrs. Jones showed her the tiny jacket and taught her to sew a button on the sleeve.  She told the girl that if she came by everyday, she would teach her how to sew.  Then she gave her a bag full of food in payment for her work, and watched her leave.

Mr. Jones said that he would keep her bear until she was ready to take it. He told her not to wait too long, since the bear was anxious to be hers.

The girl thanked them both and followed the cats home.  They all enjoyed the food and fell asleep.

Eventually, the girl learned how to sew.  Eventually, she moved into a tiny spare room in the back of the shop, where the cats were allowed to visit, or stay.  Little by little, she began to work in the store itself, waiting on customers and making sure that the bears were all happy and looking their best.

Her own bear, in her print dress and pink shoes, was a smashed and out of shape, from being held and slept on for years.  But she sat as proud as any well loved bear could sit, on the girl’s bed each and every day.  Mr. Jones offered to resew her and add more stuffing, but the girl refused, saying that she loved her bear just as she was.

As the couple aged, the girl lovingly cared for them, and turned the shop into a magical place.  Now and then, she refused to sell bears to people she thought unworthy of their kindness.

In the end, the couple crossed over, leaving all of their assets, to the girl who once lived on the street and talk to their bears during the night. She was their daughter, and they were her beloved parents, in every sense of the word.

After they died, the girl made two beautiful bears and named them Mr. and Mrs. Jones.  They sat in a special place on the shelf, where they could watch over the shop and the child they saved and adored.

It was often difficult for the bears to leave the shop.  They all knew that somewhere, a child needed them and that they had to be very brave, but it was still not easy for them to go.  The girl hugged each one before he or she left, and made all of the buyers sign a contract, saying that they would return their bears to her, for repurchase, if they ever wished to retire them.  So far ten bears have come home over the years.  Each reunion has been filled with joy and celebration.  And each bear was given a chance to tell the others what life outside the shop was like.  Their stories were filled with love, adventure and wonder.  Once back in the shop, they never had to leave again.

Generations of cats well fed and happy cats have also lived in the shop.

If you happen to pass by Mr. and Mrs. Jones Bear Shop, be sure to stop in and say hello..  Perhaps there’s a bear inside just waiting to adopt you.  You won’t be sorry if you stop.  I promise.

These are a few of the bears who live with me…

This entry was posted in Short Stories and tagged A Short story, Mr. and Mrs. Jones Bear Store. Bookmark the permalink.

8 Responses to The Bear Store…a story about true friendship.