Adam, Eve and other things… 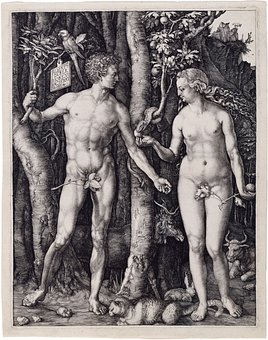 “Wow, we look terrible in this picture,” said Adam.  “And there’s a sign there, which is silly since writing hasn’t been invented, and who will read it anyway?  You look lumpy.  Definitely not a raving beauty.  Where should w hang it?”

“I don’t know why artists make us look horrible and I don’t know why your hair never grows,” she said.  “But, I’m lumpy?  Have you looked at yourself lately?  Nice abs but I wouldn’t pick you out of a crowd, that’s for sure.  And I think your leaf is poison ivy, so good luck with that.  Where’s Lilith?” she asked, looking around.

“I don’t want to talk about Lilith.”

“Why not?  She left for a reason, you know.  And your fear of reptiles is ridiculous. It’s just a snake.  There are a million of them around here.  Get a grip.  The only reason he hangs around is because snakes are cold blooded and he likes to sleep with us to get warm. They’ll do that with others, later on.  Do you want an apple?” she asked, taking a bite.  They’re really delicious.”

“I’m happy for you,” she said.  “That makes it easer to tell you I’m leaving.  I’m bored to death living here.”

“LOOK AROUND, ADAM,” she shouted.  “You refuse to go anywhere, how do we know what’s out there?”

“How are we conversing, if there’s no language?”

He brightened.  “So what comes after us?”

“There is no after us, or before us, there is no us.  We are a silly tale made up by men in order to diminish females and pretend that males are all that.  It’s a patriarchal lie, like all the other ones.”

“It’s called MANIPULATION, with a side of EGO, GREED and HATRED.  Now, I think there’s a bar somewhere around here, called,  SPURS AND SUSPENDERS.  It might be just what you’re looking for.”

“Sounds good,” he said, wiping the apple juice from his chin.  “I hope you understand, Eve.”

“Of course I understand.  Not a problem.  I hope you find what you’re looking for.”

“What’s a city?” he asked, touching her cheek.

“It’s a place with a lot of tall buildings, cars, people, guns, transportation, pizza places, fountains, parks, cops, stores, where I can finally buy some clothes, theaters, and other things, as well.”

“It will be,” she said, happily.  “At least for awhile. I plan on building things all over the place.  That way I won’t be bored and I won’t have to live in a garden, where I’m eaten alive by bugs.”

“If only we had calamine lotion.”

“True enough,” she laughed.  “Or bug spray. You know, now that I understand who you are, I think you’re a great guy.”

“I like you a lot better too.  I hope you find what you’re looking for.”

“I’m looking for someone named John Wick.  He’s a fictional character, but so am I.  I’m going to see if I can find him.”

“Everyone will like him, but he’s mine, so no.  You’ll have to make up your own men.”

“How could anyone ever believe we were real?” he asked.

“People will believe anything,” she laughed.  “I’m not sure where the dinosaurs fit into this, but people don’t care.  Things don’t have to make sense to be believed.  Some even believe that kids played with dinosaurs and read stories to them.”

“How are you going to make your humans?  What will they be like?”

Eve smiled.  “They’ll be a little of everything.  When you go to the bar, whatever you’re looking for will appear, so watch yourself.  We’ll both be making them up as we go along.”

“What if we make bad things?” asked Adam.

“This could go horribly wrong,” he said, nervously.

She smiled.  “They made us up, so look what they already did.”

Adam picked another apple off another tree and took a bite.  “Good point, Babe.”

“I intend to,” he said, throwing the core over his shoulder.  “See you, Evie.”

“You don’t look anything like that picture,” he said, smiling a her.

“I know,” she said, running her hands through her spiked up hair.  “I’m thinking of getting a tattoo on my arm that says FREEDOM.”

She laughed and turned to go.

And they went their separate ways because the stories we make up, to hurt and control people, often take on a life of their own and then everyone pays the price for that original lie.

30 Responses to Adam, Eve and other things…