Kids, blood pacts, growing up and other stuff…a short story. 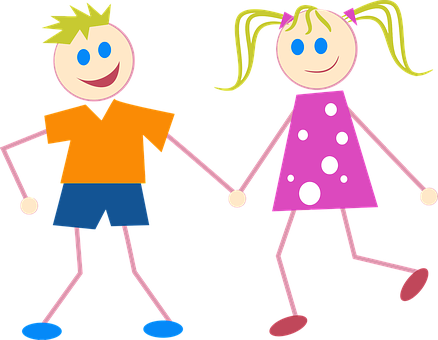 “You know why girls are usually wearing dresses and have weird hairdos in drawings and pictures?” she asked.

“So they make sure they can tell us apart.  They don’t want to mistake us for the wrong gender, then girls might be treated equally and that would be a horrible blow to the establishment.”

“What establishment?” he asked.

“Our culture, the world, all the people who expect everyone else to believe and uphold their beliefs that treat others badly.”

“You think if we looked alike in drawings, things would be better?”

“Do you want to borrow my clothes?”

“NO WAY! he shouted, backing up.

“Why?  Afraid someone will think you’re a girl?  How horrible that would be, wouldn’t it?”

He looked down.  “Yes, it would be horrible.”

“That’s how girls are treated everyday, including your sister.”

“But if you wore my clothes, it would be okay.”

“Yes.  Girls wear boy’s clothes all the time.  How about reading a book I like.”

“Too girly for you?” she snarked.  “We always have to read your stupid books.”

“No.  I want you to say that you will treat girls EQUALLY for the rest of your life.”

“I don’t even know what that MEANS,” he said, throwing himself onto the grass.

“Are we best friends?”

“Yes,” he said, sitting up.  “What does that have to do with anything?”

“Do you promise to listen to me and take what I say seriously when I tell you you’re being sexist and hurting me, your sister, your mother and girls in general.”

“Sure,” he said, holding up his hand.

“Blood,” she said, picking up a sharp shard from the street.

“I hate when you do this,” he whined.

He held out his hand and groaned.

“I haven’t DONE anything yet.”

“This is for LIFE.  FOREVER, no matter how old we get, or where we are.  You promise to listen to me?”

“I promise.  OUCH!” he said, pulling his hand away.

They joined hands and smiled.  It wasn’t their first blood pact and he didn’t think it would be their last, but he knew her well enough to know that it had to be done.

“I don’t know if we’ll ever fall in love and end up together,” she said, wiping her bleeding hand on her dress, “but I will always love you as my best friend.  Promise.”

“We’re joined in blood,” he said.  It was the same answer he always gave her.  It was an answer he believed in completely.

“And because real best friends never fade away.”

“Yes,” she whispered.  “We are part of each other and even if grown ups think we’re just doing kid things, we know better.”

“We do,” he said seriously.

Years went by, and while their families moved away from each other, they never lost touch.  They visited each other at college, talked about who the other one was dating.  They laughed together, celebrated new jobs, and mourned losses, in person and over the phone.  Now and then, they would look at the thin, white, scars that crossed their palms and smile.

One day he called her.

“Hey, what’s up?” she asked.  “How’s Jennifer?  I bet she shows her gigantic engagement ring to everyone she sees,” she laughed.  “She’s not good enough for you, but I’ll be nice.”

“There is no Jennifer,” he said.

“I’m sorry,” she said, immediately.  “What happened.  You seemed happy.”

“I’ve had to face the fact that the only woman I’ve ever loved is you,” he sighed.

“Like you don’t love me too,” he groaned.  “Be serious.  We’re bonded by blood, remember.”

“Naturally,” he said.  “I wouldn’t expect anything less.  Your dress will look like a horror film.”

“I don’t have anything better to do,” she snickered.

“I love you too.  I’ll make grilled cheese, to celebrate.”

“Perfect,” he laughed.  “Why didn’t you tell me that this was going to happen?”

This entry was posted in Kids, Life, Short Stories and tagged A Short story, and other stuff, Blood pacts, growing up, Kids, Life. Bookmark the permalink.

8 Responses to Kids, blood pacts, growing up and other stuff…a short story.