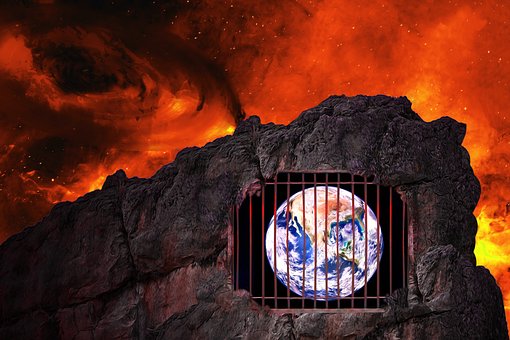 The earth, and everything on it,  is being held hostage by a bunch of idiot MEN in government.

Everything in our world has two sides.  Fire cooks our food and it keeps us warm, but it also burns, destroys and kills.  A good side and a bad side.  Everything is like that.  The sun keeps us alive but it can burn us, give us a  horrible disease and, in the end, it will eat the planet.

Rain feeds the plants and floods New Orleans and Venice.  There are no safe places and nothing is ever certain.  Things can always go either way.

Our brains have a built in defense mechanism, that keeps some of us relatively sane.  We just don’t think about things, or we rationalize, lie, and generally look the other way.  That’s what we’re doing right now…looking the other way and lying to ourselves.

We’re taught, from early on, to look the other way, so we’re very good at it.  Unfortunately,  looking the other way is eventually going to kill everything.  Knowing that, far too many people lie and keep telling themselves that everything will be okay.

People have been brainwashed into believing that THEY CAN’T TAKE CARE OF THEMSELVES.  They were taught to EXPECT and DEPEND upon their gods and governments to would take care of them.   But WHY CAN’T PEOPLE TAKE CARE OF THEMSELVES?  Honestly, adults should stop LETTING other people tell them what to do, what to believe, and what to think and just take responsibility for what’s going on around them.

Greta Thuberg is a great speaker.  She’s determined and she doesn’t take any garbage from any of the men who try and ignore her, when she’s talking about climate change  She doesn’t realize they don’t care.  What has changed so far?  Any corporations shut down for pollution, or are they still paying fines to keep doing what they’ve been doing for years?  The MEN in suits listen to her for good press, not because they plan on doing anything about what she’s talking about.  Not unless there’s money in it.  They aren’t going to shut down the Golden Goose for her, or anyone else.

What happened to the school kids marching for gun control?  Their faces aren’t showing up on the covers of magazines any longer.  They had their 5 minutes of fame and the people who can do something about gun control don’t care about dead kids, so the issue, is no longer news.  The excited kids can’t bring in anymore money, their story isn’t selling, so what good are they?  It’s a dead issue.  All those t-shirts, buttons, marches, speeches, etc., what were they about again?  They couldn’t get anywhere at all, because people are not allowed to get anywhere at all.  No one can make a difference any longer, the government won’t allow it.

People refuse to USE their power.  We have been divided by gender, race and location.  That, of course, has been done on purpose, so we DON’T work together to bring about real change.  The six idiot men in charge make the decisions for all of our lives.  And none of those decisions have anything to do with them, other than making them richer.

People need to understand that.  We, the people, are allowing greedy idiots to kill all of us, along with every other living thing on the planet.  Seems really stupid to me, especially since everyone is always talking about how much they love their kids, and everything else.  If you love people you want to protect them.  But we aren’t doing that.  We’re letting ugly men clog the lungs of our kids with dirty air.  Killing them with poisoned waters, unjust wars, and through the destruction of our environmental.  So, people should start saying that they love the people they love, just not enough to actually do anything to keep them  healthy and alive, other than paying doctors and drug companies to counteract the pollution that never ends.

There is only one to stop them.  Massive boycotts.  Money is the only thing that matters to any of them.  Whatever they own, or get money from, we HAVE to shut them down.  All we have to do is stop buying what they’re selling.  Stop buying from companies that pollute.  That is the way to get their attention.  Money is the only thing they care about, so we have to stop giving it to them.  But we all have to do it.  It has to be a HUGE boycott, if it is to make a difference.

Where did all the bookstores go?  All the shops are closing because people stopped buying from them.  That’s what we have to do to the holdings the government has.  To the corporations we don’t like, the one’s who keep dumping poison into OUR air and water.  It’s not hard to do, if people will do it. It won’t cost us anything. But people won’t even stop using plastic bags, so I doubt whether they’ll be interested in boycotting anyone and, therefore, NOTHING WILL CHANGE.

NO ONE IS WILLING TO DO WHAT NEEDS TO BE DONE TO STOP ANYTHING THAT’S HAPPENING.   WE HAVE THE POWER, we just refuse to use it.  So, we’ll get what we deserve and I’m okay with that.  I’m not okay with killing all the innocent animals and other living things.  We are responsible for their deaths.