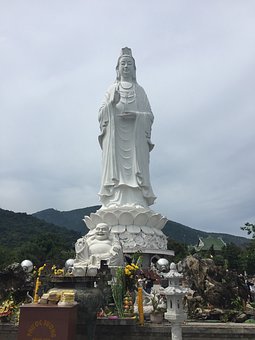 Here’s my problem with Quan Yin.  Keeping your eyes closed doesn’t really help anyone.  It’s kind of like fasting.  If you die from not eating, for whatever cause you’re fighting for, you just become a symbol and they make T-shirts with your face on them.  Sure people might get fired up in the beginning, but they’re alive and can actually do something, while the the other person is dead and can just relax and let other people handle the problem.  It’s pretty much the same with all the gods we make up.  It’s definitely time for Quan Yin to open her eyes and get to work.

How does sitting still, with your eyes closed, help ANYONE at all?  It doesn’t.  If she’s suffering because of the suffering going on on earth, how could she possibly believe that not looking, will help anyone, or anything?

I look at her face (there’s a statue right next to me), and she looks peaceful, I mean she’s a statue, but her appearance is peaceful.  It shouldn’t be.  She should be more like Kali, with  a necklace of skulls around her neck, I don’t see Kali helping the cause either but still, she’s at least vicious and with the program.  Maybe Kali does her thing at night, who knows.

I’ve known a lot of people who have gone through their lives with their eyes closed.  They caused a lot of harm to others, even to their own kids, but they thought it was easier not to look, rather than be present and act.

I guess Quan is from that school of thought.  It’s never easier to sit back and close your eyes, not in the long run.  If you do that, the bad guys will always win.  See, this is where it gets tricky.  WE might not win, but we can hold our ground.  I think that’s important when you’re fighting someone stronger than you are, richer, with an entire MILITARY MACHINE behind them and all the money in the world.  So, we, the little regular people, can’t just give up and close our eyes, or there will be nothing left.  Standing up to overwhelming odds still has to be done.  It’s only infants and tiny toddlers who believe that if they close their eyes, or put a diaper on their face, things really disappear.

Quan Yin needs to bloody well wake up and stand with us, with her eyes OPEN.  That’s the thing about gods, they are usually bystanders.  Well, that and the fact that we really don’t matter at all.  And the part about none of them being real to begin with…I mean surely THAT counts for them not showing up.  They don’t exist.  I think they’re metaphors, that’s all.

We need to stop making excuses for the gods we make up and face the fact that we’re in his, whatever it is, alone.  ALL the gods are pretend, that’s why they never do anything. They can’t, since they aren’t real. Made up gods are just the way men in costumes steal from people.  I’d like to know who made up Quan Yin.  I mean who makes up someone who won’t open their eyes?  Did the people who made her up think that people would feel sorry for her and suddenly become good, so she could see again?  And suffering comes in all kinds of forms, so good luck.

Having said that, we need Diana and her hounds, we need all of the Goddesses to give us, their daughters, the power to overcome male violence and inequality.  That’s really all I want for Christmas, an end to patriarchy.  That’s all I EVER want.   No one even has to wrap it.

Patriarchy, Philosophy of life and other good stuff, Politics/Herstory