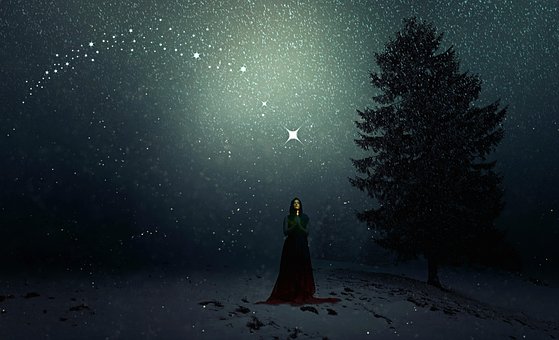 Life hadn’t be easy, but at least she made it this far.  She had helped many of the forest animals and some people, as well.  But everywhere, things were changing.

The Ways were opening, allowing creatures, good and bad, to enter the earthly plane.  She couldn’t stop them, not by herself.  Slits in the time-space fabric of the universe were being made and people were angry, full of hate and violence, due to the influence of the beings who were feeding off of their baser emotions.  Her spells were becoming less effective, as more of them came through.

Those who spread love and joy, were working as hard as they could, but negativity weighs more than positive things, so it was difficult and exhausting work.  They couldn’t keep up.  The Tipping Point was at hand.

She followed her last patient into the clearing and said goodbye. The rabbit nodded and hopped away.  She stood shivering, staring at the sky.  “I hadn’t meant to stay this long,” she whispered.  “I fell in love with the forest and with those who lived among the trees,” she continued.  “I’m depleted.  I need help,” she whispered.

A doe walked up to her and pushed her with her nose.

“Your eyes were closed and your thoughts were elsewhere,” said the doe.

“You’re so beautiful,” she said, running her hand down the doe’s neck.

“What does that mean, beautiful?”

“It means that you’re pleasant to look at.”

“Does how I look matter?” asked the doe.

She thought for a moment, then said, “Sometimes.  Even when it shouldn’t.”

“That’s not a very good answer.”

I’m sorry but it’s the best I can do at the moment,” she said, tiredly.

“Winter can be difficult.  Especially for the weak and the old,” said the doe, matter-of-factly.

“Are you weak, or old?” asked the doe, staring at her.

“Well, if you’re not weak and you’re not old, why don’t you call down the stars to help you?”

“You know that I am,” she said frowning.

“Then call down the stars.”

“I don’t know what you’re talking about, my friend,” she sighed.

“She doesn’t know how,” said the coyote, walking out from behind a tree.

The doe looked at the coyote.  “Can you teach her how to do it?”

“What’s at stake?” asked the woman.  “What do the stars have to do with anything?”

“Make your circle,” said the coyote.

“Listen to him,” said the doe, backing up.

She made the circle and empowered it with a drop of her blood.  “Now what?” she asked, looking at the coyote.

“Now, you call down the stars.”

“The darkness is getting thicker,” said the doe, nervously.

“Listen to me,” said the coyote.  “You’re a witch, it’s part of who you are.  You can do it.  You already know how.  Put your hands together.  Feel the energy pass from one to the other, then look up and CALL DOWN THE STARS.  Do it NOW!”

She nodded, slapped her hands together, closed her eyes, threw back her head and silently told the stars to come to her.  She called them, sometimes by name, she called them over and over again, sending out an SOS, asking for help.  She did this for what seemed like a few minutes, but was probably a lot longer.  When she opened her eyes, she saw an arc of stars coming toward her.  She laughed, turned, threw open her arms, and the stars entered her body.

The doe and the coyote watched her stand there, glowing.  Then she smiled, clapped her hands together three times and yelled, “BE GONE AGENTS OF DARKNESS, THIS IS A PLACE OF PEACE, LOVE, AND STARS.  BEGONE!”

There was a loud noise, and she crumpled to the ground.  The coyote ran over to her, broke the circle, and pushed her with his foot.  “You did good,” he said.

She began to move.  “Did it work?” she asked, lying sprawled on her back.

“You sent the darkness back where it belongs and then you closed the doorways.”

“It is, but you’ll have to find a new government for the people.  You sent all darkness away.”

“Did I get rid of the hunters?”

“What do they feel like,” asked the woman, standing up.

“I’m so sorry.  I hope they’re gone forever, and I understand about the stars,” she said.  “They’re pure light, and darkness can’t live in the light.  Not really.”

“Most of it can’t,” agreed the coyote.

“Will you both be sleeping in the barn tonight?” she asked, kissing the doe, then bending to kiss the coyote.  “Thank you,” she whispered.

A huge crow landed on her shoulder, and CAWED loudly.  “What did I miss?” he asked.

“You can be really LOUD, sometimes,” she said, rubbing her ear.  Then she told him what happened.

He cawed a couple more times and said, “You do know that stars are actually suns, don’t you?”

“HOT!” he screamed, flapping his wings, hopping up and down.

She laughed as they walked toward the cottage..  But the crow may have been right.  She wasn’t the least bit cold, in fact, she was thinking of opening all of the windows, once she got inside.

* Sometimes bad people and monsters lie and stir up trouble because they’re hungry.  They feed off of the anger, fear, violence and pain of others.  Maybe we should all sing and dance a lot more, so they starve to death.  It’s certainly worth a try.  Don’t put it off, start today.

This entry was posted in Short Stories, Yule and tagged Yule story. Bookmark the permalink.

12 Responses to A Yule Time Story…