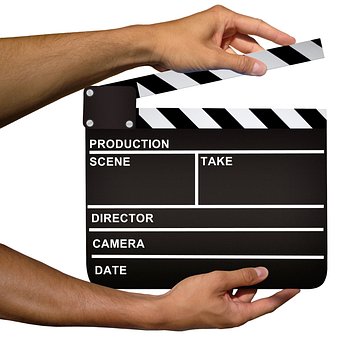 If our lives really were like movies, there would be music.  That’s important, since it jerks us around and makes us feel what the film people want us to feel.  The movies wouldn’t be worth watching without the music, even if we aren’t aware of it while we are looking at the screen.  Even when people went to see Silent Films, there was someone playing the piano. Star Wars know that there’s no sound in space but they added the sound to the fighting because they couldn’t just let the spaceships fight each other in silence.   No one would want to watch the truth.

The thing about our personal movies, is that there’s no script and a lot of ad libbing.  Terrible things pop up when we least expect them and wonderful things happen the same way.  We’re like leaves blown in the wind.  We can never count on things being the same way for any length of time and if we do fall into that trap, life just throws back its head and roars with laughter, then slaps us into the wind once again.

But no one is looking, or watching our lives unfold.  There aren’t any rows of seats in front of us, no popcorn, or balcony full of on lookers.  Who would stay through the whole thing anyway?  I think people think other people are pretty BORING, even with music trying to pull them in.

Another thing, if bad things happen in real life, people don’t get up and walk away without a scratch.  If they die in the film, when the director yells CUT, the guy gets off the bed, ground, wherever he’s laying, and makes another movie.  That might actually happen to us, but we don’t know that for sure and even if it does, the next movie would not be made in our current body on earth.  If we’re dead, the film’s being made somewhere else, or not at all.

Movie’s aren’t real, our lives are (I think).  If our car crashed through the window of one of the tallest buildings in the world it would NOT  fly to the next building, and the one after that.  Our car would nosedive and crash into the ground the second it went out the first window (Fast and Furious).

We don’t live with perfect lighting, or spotlights either.  No make-up artists, beauticians, designers either.  When the lights go our in the theater, our focus is directed to the screen.  Everything else is shut out.  It’s like a strange depravation room/tank.  What’s going on, on the screen, has our full attention.  A lot of people don’t pay much attention to their lives while they’re living them.  Too dull, too full of distractions and a plot that has glitches.

Most of our lives wouldn’t be box office smashes.  We’d need CGI to make it worthwhile.  Lots of fires, bombs going off, people doing upside down helicopter tricks, things like that.  The audience likes excitement and fake things, which can make everyone feel that their own lives are a bit FLAT.  I mean not many of us jump out of planes without a parachute, catch the other person going down, and hitch a ride.  Lots of people just go to work everyday.  Lots of people hate what they do and that’s not fun to watch.

Not only do we not save the world, off the screen, we can’t even change the smallest thing.  Entertainment is an escape.  Drugs, alcohol, and a million other things are escapes as well.  People want to escape.  They are willing to die to get out of here.   That’s why we go to the movies, to distract ourselves, to see the bad guys get what they deserve.  To watch even fake people make a difference, when we can’t.  We want to see someone do what we wish we could do…even if it’s all pretend.

This entry was posted in Film, Life and tagged Life, movie/s. Bookmark the permalink.

12 Responses to The Movie…