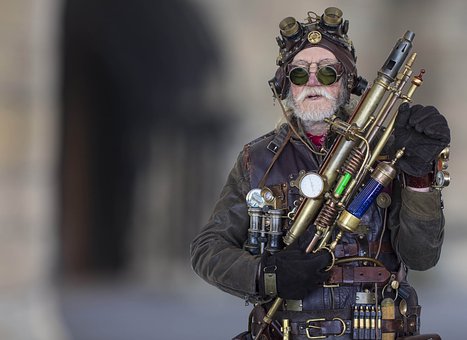 Of all the places he could have landed.  What rotten luck.  Earth.  One of the only places in the entire universe where no one wanted to go.  The creatures here couldn’t even get off their own rock.  Talk about backwater towns.  Some AI must have thought it was being funny. “Payback’s a bitch,” he muttered, under his breath.  “I’ll reset your program so you’ll think you’re a typewriter.”

“I heard that,” snickered the AI.

He checked his data base, looking for any TC’s (Time Criminals) who might be hiding here, although WHY anyone would come here, even to hide, baffled the mind.   Three names came up.  John Milton, Stanley Lewis and Bradford Tuttle.  He watched their faces and info flash in front of his eyes. “Data for said TC’s,” he said, and pictures, with additional information appeared before him.

“Wow!, said woman, staring at him.  “That is, without a doubt, the most authentic and best looking Stea…”

“Move along,” he said gruffly.

“Rude and nasty,” she said, her hands on her hips.  “I was giving you a compliment.  You could have just said, thank you, but instead, you chose to be mean.”

He stood there, not knowing exactly what happened.  No one should talk to a Hitman in that tone of voice.

“You know, that’s whats wrong with the world today.  People are RUDE for no reason at all.  I can see that you might not want to chat, or maybe I was disturbing your train of thought, but you still could have been pleasant.  Have you been to Burning Man?  You’d probably like it there.  Lots of Steampunk fans.  It’s about alternate realities and what could be, might be, and probably is.  It’s letting go of things and being free.  It’s an explosion of creativity.  It’s held in Nevada.  You know where Nevada is, don’t you?”

“Well, don’t let me stop you, crabby man” she said, walking away.

A guy walked by and gave him a thumbs up.  People were staring at him.  Someone asked him if he made the gun himself.

He ignored everyone and found the building for John Milton.  He rang the bell.

A kid answered the door and yelled, “Hey, mom.  Is it Halloween?”

“No, sweetie,” said a voice, from inside the house.

“I don’t have any candy to give you,” said the boy.

“Don’t you know where your friend lives?  I have a friend who lives right over there,” he said pointing to the building across the street.

“Who is it honey?” said the woman, finally coming to the door.  “Fantastic costume,” she said appreciatively.  “What’s up?  Are you collecting for something?”

“You’re collecting for someone named John Milton?  Why?  Who is he?”

“No.  I’m looking for him.”  This would be so much easier if these humans had implants, he thought.  Then I could just read her mind.

“Never heard of him.”

“Do you know Stanley Lewis, or Bradford Tuttle?”

“There’s a Bradford Tuttle who teaches at the University, but I don’t know if he’s the Tuttle you’re looking for. ”

“You have been helpful.  Thank you.”

“Are you going to kill him with that gun?” asked the boy.

The woman laughed.  “Hope you find who you’re looking for,”  she said, starting to close the door. “You’re not really going to kill him, are you?”

He smiled and thanked her again.

The address for Stanley Lewis was on the way to the university, so he stopped and knocked on the door.

“Yes?” said a housekeeper, looking him up and down.

“Well, you’re the first one.  Count yourself lucky.”

“Dead as a doornail.  Some woman shot him in a bar fight.”

“Before they buried him, did you see the body?”

“Did you actually see the body just before he was buried?”

“Thank you,” he said.  He sent a message to the AI monitoring him.  “Stanley Lewis is a runner.  See if you can find him.”

The university was on the main drag.  Small college town.  He was almost suffocating from the lack of tech.  It was starting to depress him, so he gave himself a shot of PR6, which hit his blood stream like a rocket and suddenly, everything seemed a lot more to his liking.

He stopped at the office and, after the woman behind the desk called her friends to see how fabulous his outfit was, she directed him to Tuttle’s office.

Tuttle was behind his desk.  He was speaking to a student, sitting in the chair across from him.

“Okay, James, let’s finish this tomorrow,” said Tuttle.  “You’re on the right track and you’re work has improved quite a lot.”

The boy looked at the gun, then at his teacher, and left the office.

“How’d you find me?” asked Tuttle.

“I was sent here by mistake.”

Tuttle nodded.  “It took me years to get used to this place.  It’s so slow it’s like being dead, but still breathing.  Once you get used to it, it’s better than being in prison on some planet past Pluto.  I’ve heard a lot of prisoners freeze to death in those places.  Are you here to take me back, or eliminate me, Hitman?”

“If it were up to me, leaving you here would be punishment enough.”

“They have a lab here.  It’s crude, but it’s earth, you can only expect so much. I did a bit of genetic manipulation, that’s all.”  He showed him a picture of his kids.

“Why would you do that to them?”

“They’re fine.  I check them monthly.  And frankly, I wanted to be more like everyone else on the planet.  I thought I’d be here forever.”

“That would be the fourth time,” he laughed. “He’s not dead, he’s starting over someplace else.  Whenever his debts get to the point of someone breaking all his bones, he dies and reinvents himself.”

“I hate it here,” said the Hitman.  It’s so small and tight.

He clicked the safety off.

“Do you know how many beings I’ve destroyed for Home?” asked Tuttle.  “It’s only fitting that I go out the same way.”

“I’ll disable your trans, so I know you can’t leave,” he said.  “If you can stand it here, you can stay but you’ll never be able to leave.”

“Do it,” said Tuttle, nodding.

“Better here than at home,” he said.

He pulled an instrument out of his pack and walked up to Tuttle.  “Close your eyes,” he said.  Then he pushed the button.

There was a knock on his door.

“Come in,” said Tuttle, lifting his head off his desk.

“Am I interrupting?” asked one of his students.

Meanwhile, the Hitman visited the Tuttle house.  He introduced himself as an old friend of Bradford’s.  He slapped a dissolving patch on each of the girls, that fizzed and lasted thirty seconds.  They’d never be able to reproduce.  He had coffee and a donut, then left.

“What was he thinking?” he muttered, staring up at Big Ben.  “Half human, half alien, offspring.  Can’t have that in this place or they’ll be burning people at the stake again.”  Then he was off to find 45 and his nice girlfriend.

This entry was posted in Uncategorized. Bookmark the permalink.