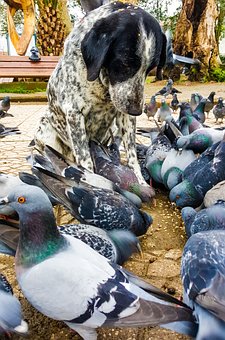 Randolph loved pigeons.  Everyday, the person he lived with brought him to the park, and everyday, the minute he sat down, the pigeons began to gather around him.  Yes, corn kernels were on the ground in other places, but Randolph was only in one spot. That spot, was where the pigeons were happy.

The birds loved Randolph.  They sat eating, between his front legs, cooing to him, rubbing against him and treating him as if he were just a larger version of themselves.   He never disturbed the birds, or stepped on them, even accidentally.  He was carful and very gentle with his feathered friends.

The birds never pecked at him, or asked him to get off of their seeds, they just worked around him, accepting an occasional lick and listening to him whine and squeak, every now and then.

The pigeons often followed Randolph down the walkways, when his person was taking him home.  And they always watched over him from rooftops, streetlights, and windowsills as well.

Randolph and the pigeons had formed a bond.  It was a mutual love affair made up of joy and trust.  It was a beautiful thing.

This entry was posted in Animals/Birds, Short Stories and tagged A Short story, Randolph and friends. Bookmark the permalink.

9 Responses to Randolph and friends…