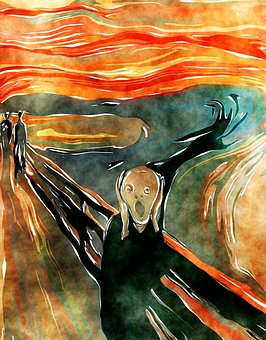 “WHAT is that horrible noise?” asked the woman, putting her hands over her ears.

The museum guard just shook his head.  “It’s the guy from Edvard Munch’s painting, THE SCREAM.  He keep escaping from his picture.

“Seriously?” asked the woman.  “The people in the pictures actually come out of them?”

“All the time.  Usually at night,” he said.  “But Munch’s guy is being driving crazy by today’s politics, so he screams quite a lot”

“I can certainly understand that,” said the woman, sighing. “I feel like screaming about that myself.  Tell me about the others.”

“It doesn’t happen all the time, but when it does, it’s always amazing.  The dogs enjoy running around,” he said, grinning.  “Pictures like the Mona Lisa in Paris, never come out.  She’s covered by boxes, to protect her,  and keep the temperature where it should be.   Poor Mona can never leave her painting.”

“How terrible for her,” said the woman, frowning.  “Can you talk to them when they’re out of their paintings?”

“No. It’s not  like that. I don’t think they even notice me and I stand well back from them.  I don’t want to ruin their fun.  I’ve seen them dancing in the hallways.  Chatting, or just walking around.  I saw the crows fly out of Van Gogh’s picture, one evening.  It was beautiful, but loud.  A lot of cawing, as you can well imagine.”

The woman thanked him and headed toward the second floor.  She sat on a bench and looked at a very large and colorful canvas.  After a while, when she was alone, she took off her coat and shoes, then stood in front of the painting.  Eventually, someone reached out a hand and helped her get back in, where she became still and a vivid shade of red.

This entry was posted in Art, Short Stories and tagged A pretty short story, art. Bookmark the permalink.