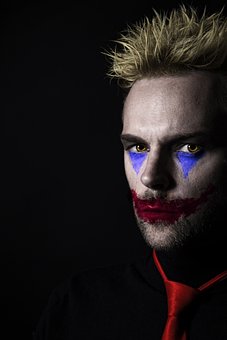 She saw him walking down the street, enjoying the crisp night air.

“I can see that you’re not used to wearing lipstick,” she said, grinning at him.

“I’m supposed to be scary.”

“Oh, sorry.  I didn’t get that,” she said.  “I just thought you didn’t understand makeup. Who, or what, are you supposed to be?”

“My name is…oh, never mind,” she said, flapping her hand at him..

“Weirdest name I ever heard.  Who names their kid, Oh Never Mind?”

She laughed again, and wiped her tears on her sleeve.  “Let’s start over.”

“Not Damian.  Tell me it’s not Damian,” she pleaded.  “Because you’re really cute and funny but I won’t go out with a guy named Damian. Especially, on Halloween.”

She made scary hands and walked toward him.  “Evil, hell mouth.”

“You mean The Omen?” he asked.

She nodded.  “Hate that film.  I like Constantine, with Keanu.  Easy to tell the good guys.”

“And what makes you think you’re going out with me?” he asked, chuckling.  “I didn’t ask you yet.”

“OMG, don’t you know James Bond when you see him?”

It was his turn to laugh.

“Are you attached to anyone?” he asked.

“Do I look as if I’m attached to someone she said,” holding her arms out to the side.

“What kind of spy would I be if my gun was fake?” she asked, shaking her head.  “Don’t you know anything about Bond?  And are you attached?”

“ME TOO.  What if the people we are no longer with just met each other and they fall in love and we just met and we…go out for pancakes?  How incredible would that be?”

“You were going to say fall in love.”

“Particle Physicist.  How about you?”

“Spook for the government.  I kill people.”

“Hmmm, both exciting occupations, with a lot of variety,” she said, thoughtfully.  “Although, you probably travel more than I do.”

“I kill people for a living and that’s all you have to say?”

“Uh, did I miss something?”

“I’m not sure.  I never actually tell people what I do.  I thought it might be off-putting,” he said.

“Well, I’m not even sure we’re real, and I spend my time thinking about the fact that time and space are reversed inside a black hole, so that’s probably off-putting as well.”

“If I meant Electra, I would have said Electra.  My parents are scientists and it was either that or Quark.”  She looked at him, then looked at him some more. “Say something, will you?”

“Short and to the point, right?”

“I was just wondering.”

“I’d really like to meet your family,” he said, chuckling.

She burst into hysterics.

He started laughing.  “Maybe we should both change our names.”

“I think you’re onto something,” she said.  “I always wanted to be called Milly.”

“I always wanted to be called Shane.”

“Why don’t we just call each other those names, then.”

“So, Shane, wanna get some pancakes and then go to a Halloween party?”

“I can make pancakes at my place and we can have our own party, if you like.”

“Oh, man, on Halloween?  Are you crazy?  We’re going for pancakes, then candy, then parties, then we’ll go to your place.”

“You really don’t look at all scary,” she said, taking his hand, as they started walking.

“Thanks. That’s what I was going for,” she said happily.

This entry was posted in How they met and tagged Halloween, How they met. Bookmark the permalink.

5 Responses to How they met…a longish short Halloween story