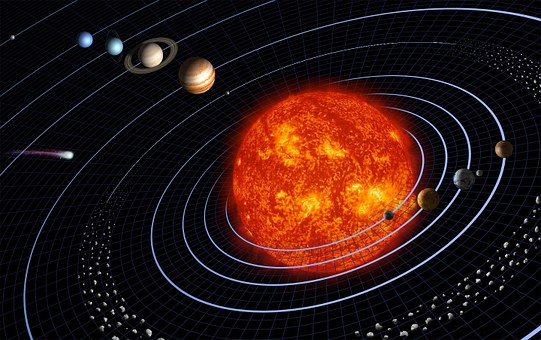 I used this picture because Pluto’s in it.  When our probe flew by Pluto, the scientists were surprised, since there’s a lot going on, on that wee planet.  Scientists now call Pluto a Dwarf Planet.  That’s the nice thing about life, if we want Pluto to be a planet we can ignore what the scientists say and call it anything we like.   We can call the scientists things too, that’s the way it works.  Anyway, you can see Pluto, it’s the tiny white dot on the upper left.  And just for the record, Pluto doesn’t care what we call it.  We name everything so we can understand what other people are talking about.  That, however, doesn’t always work, so then we go to war and kill them.  But what we name doesn’t actually care if we call it anything at all, which is my point.

When the sun starts turning into a red giant, you can clearly see who will get eaten first, right?  And when you look at the Sun, you’re looking at a Star, so that’s what all the stars in the sky look like.  How did we ever come up with the pointy things we call stars?  Maybe the person who invented stars didn’t know that the sun was one.  A big orange and red ball on the top of the Christmas tree would look funny, now that we know that’s what should be there.

When I look at the picture I want to run my fingers through the orbital lines and watch what happens.  The problem is that I’d have to b a LOT bigger to be able to do that.  Still, it’s fun to think about.  Everything would wobble, go flying into someone else, or into space.  Hey, it’s just a thought.

Gas planets are strange.  To put it mildly.  Why don’t we talk about those things more often?  Gas planets are confusing, since we know so little about them.  They may have a core, or they may not.  It could be rocky, iron, or frozen hydrogen.  Scientists have no idea. Well, they have no idea about most things.  Everything’s really far away and dangerous, so there is that.

Anyway, think about the fact that all around us there’s Dark Matter, Space, Junk, and a gazillion planets, stars, black holes comets,  silence, and things we can’t imagine AND there are no edges.  You could walk FOREVER and never reach an edge because edges do not exist.  Humans like edges, beginnings and endings, so that’s hard for us to think about.

But the truth is, we don’t know what the truth is.  Maybe there is an edge, how could we possible know when working with a scale that large?  We’re like preschoolers, when it comes to the universe.  Maybe we’re floating in a great big casino like the ones at Vegas and we don’t know that either.  Things can be bigger than the universe can’t they?  We don’t know for sure that there can’t be things that are bigger.  Maybe the universe is inside a gigantic hamster wheel, that’s why we keep spinning.  Anything can happen, right?  Ha!  No you say, but you can’t be sure because no one knows what’s really out there, or what’s really gong on.

Maybe we’re pets of some long lost group of beings and someone, or something, forgot to bring us inside.  Or maybe this IS inside.  It’s impossible to believe the FACTS, since they change so often.  NEW info is coming in all the time and so is disinformation.  Actually, I’m going with the idea that almost all we get is disinformation.

Don’t you think yoyo’s can teach us a lot?  I mean if we concentrate, there’s a lot going on with a string and two macaroon sides.  Everything needs to be right for things to work, well, work in a way we’re used to.  You can WALK THE DOG with a yoyo but, if someone puts their finger on the string, while you’re doing it, it turns Walk the Dog into, Where is the Dog?   That’s what I mean about playing with the orbital lines on the picture.

What if the earth stopped spinning?  If the earth just STOPED, everything, and I mean EVERYTHING, would be GONE. because the 1,100 mph atmosphere would still be moving and rip everything away and toss it into space.  Good thing that’s not going to happen soon.  At least we don’t think it will.

What if one of the planets moved?  They’ve done it before, but that was a long time ago, before they all decided where they wanted to live.  Still, if one gets really bored…

Okay, I was just having fun, thinking about cool things, and now I’ve gone and dragged you along with me.  But really, we sit in tiny chairs and live inside  tiny things and everything around us is bigger than we can ever imagine, but not a lot of people seem to think about that.  Why don’t they?

“if it was a secret vote, 30 Republican senators would vote to impeach” — Art of Quotation

Comments on: "You are HERE…Ramblings" (8)