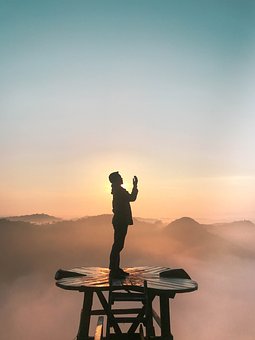 “Um, excuse me,” she said, once the man reached the ground.  “I saw you standing up there and was just wondering what you were doing?”

“I was trying to get god to do something about the state of the world.”

“Hmmm  If god is everywhere, you really didn’t have to climb anything to get god’s attention.  Besides,  what if you were upside down and it’s time for the people on the other side of the earth to be right side up?  And when you think about it, god never did anything to stop what was happening before, at least not that we know of, and a lot of the things that happened were nightmares, so why would god start stepping in now?  And why do you think god would listen to you anyway?”

The man stared at her.

“There is no upside down, you know that don’t you?  I thought you would say something about that.”

“What if god likes violence, war, hatred, death and destruction?  I mean you don’t know that god doesn’t, right?  If you believe god made you, then that’s HOW your god made you, violent, and destructive.  God could have made everyone sweet and healthy but nope, god made killer diseases and death, destruction and violence.   Apparently, that’s how god wanted things to be.  Sick and deadly.  I mean, if god started from scratch god could have make things anyway s/he or it want to make them.  God chose this.”

“What difference does it make?  I’m just saying that your idea of a god doesn’t mean a god would be like what you expect her, him, or it, to be like.  You can’t possibly know what a god would like or not like.  And there’s no free will either.  Sure, people can make choices but the choices are often made under duress, or they’re extremely limited, offered by someone who is abusive, like the whole system, or there aren’t any real alternatives.  I mean no one even knows what free will IS because they’ve never experienced it.  And why do you think any god would live in the sky?  What if god’s walking around down here starting trouble?  What if god’s making people sick, or getting gang members to kill each other.  You don’t know that god’s not doing those things.  Or maybe god’s sitting int he park feeding pigeons, or living under Chicago, in the tunnels, in a cardboard box, or under the ocean, or maybe god’s a tree.”

“Yeah, I get that a lot.  No one wants to think about that stuff.  Still, you looked silly standing up there talking to yourself.”

“What if he wasn’t home?  Besides, you don’t even know where god lives.”

“I already said that.  Do you know for sure that god’s a he?  Maybe god’s an it. And again, most importantly, why do you think god would listen to you?”

“He listens to everyone.”

“You said that.  Have you ever asked your god if you can do anything for him?”

“How do you know what god want’s you to be?”

“What do you believe in?”

He nodded.  “Is that possible?”

“No idea.  Only you know how much you don’t like me right now.”

“Do you believe that god is good, when he sent his only kid to die, when he could have done that himself?  Would you do that to your child for ANY reason?  Do you believe a kind and just god would allow violence to exist?  Hatred?  Sickness?  Hey, if your god supposedly made you, then he gave you all of those things.  Things like envy, and all the other things people think are sins.   What kind of god would give those things to the people he made and then expect them not to use that stuff?”

“I’m okay with that.  All the things you’re saying were put into your head by others.  That doesn’t make it true.”

“Good question.  There is no grand TRUTH, there’s only personal truth.  So, everything only exists in your own mind and whatever you believe is true, is true for you.   But that doesn’t mean it’s actually true…you just believe it is.  What if I told you I was god?

“I wouldn’t believe you.”

“What does god look?”

“Who do you think saw god so that s/he could draw him or take his picture?”

“That’s not funny,” he said angrily.

“So, the reason I’m not god is because I don’t look like the picture someone painted, or drew?”

“Ah.  There is that.  Because you believe that god is male.  But what if there is no god?”

“Why do you need to believe in anything other than yourself?”

“Do you need someone to forgive you or save you? And if people talk to invisible beings isn’t that usually a sign of mental illness?”

“Okay, nice talking to you.”

“If you have kids, don’t let the priests at them.”

She watched him walk away, then turned and saw a guy, in a grey hoodie, walking toward her.

7 Responses to The Conversation…