“Aren’t you going to tell me that my plan is insane?” asked Judy, as she and her Knight trudged through the trees.

“You asked me to trust you.  I do,” he said, holding a branch out of their way.

“You cat is starting to get on my nerves,” said the Knight, glaring at Danny.

They looked through the bramble and saw huge rhinos, covered with thick, dark, gray plated armor.  Some of their horns were decorated with runes and hieroglyphs and on top of many of them, sat dirty, short, burly, bare-chested, squat men, with thick arms, no necks to speak of, and wide stubby hands hands.

“Not GQ material, that’s for sure,” she said.

“Must have troll blood in them somewhere,” whispered the Knight, pulling a long, slender blade from his boot.

“I’m going to go out there and talk to them.”

“What!” he said softly, but with a lot of emphasis.

“Why didn’t you just say that?”

Judy shook her head, and stepped into the clearing, her cat by her side.

The sudden silence was deafening.

“Hi,” she said, feeling the sword strapped to her back, start to vibrate.  “My name is Judy.”

A very scarred guy, who looked like a lot like a small troll, pushed the men aside and stood in front of her.  “Are you a gift?  Judy,” he grunted.

“Should I kill you now, or later?” he asked, showing his chipped and broken teeth.

“I just want to know how many of your men are willing to die for nothing, when they don’t have to.”

The troll-like man laughed.  “I’ll kill you later,” he said, trying to look over his shoulder at his men.  It’s hard to look over your shoulder when you don’t really have a neck, so he had to turn a bit sideways, but the point is, he looked at his men.

“I want to know why we’re fighting,” she said.

“Why…are we fighting?” she said slowly, as if he was unable to understand speech spoken at the normal speed.

The troll-like man pulled a knife out of his ragged belt and it melted in his hand, burning him so severely, he screamed.

“You should probably take care of that,” she said.  “I’m sure it hurts and you won’t be able to hold a weapon in that hand for some time.  Unless it becomes infected and you die.”

The men in the ranks, began to grumble.

“I’ll kill you now,” he said, lunging toward her.

Judy reached forward and touched the spot where his heart was and the man fell to the ground.  “Look,” she said, to the stunned men.   “We can all be friends.  You can let your rhinos go and they can graze in your valleys and be at peace.  You can be at peace as well.  Some of you can come to the castle for dinner on holidays, if you like.”

The trollish man on the ground moaned and opened his eyes.

“It’s like a stun gun, only with my finger,” she said, looking into his eyes.  “I can kill you with it, if you want to be difficult.  My advice would be to lay still and let me get on with it.”

He growled and reached for Judy, but Danny, ripped his claws across the man’s face, and he screamed again, as blood seeped though his fingers.

Another man stepped forward and looked around.  “We fight because that’s what we do,” he said LOUDLY.  The men cheered.

“You can do other things instead.”

“I see.  Well, how about farming, starting your own business, or just sitting around relaxing.  You can always read or bake.

“Manly?  Real men don’t fight, they think and eat quiche.  Besides, how manly can you be if you’re dead?  But how about this.  What if you fight each other, rather than strangers?  You can have a big prize for whoever wins.  Like a rhino, for example.  You can fight, one on one, and not only does no one have to die, but one of you will win a rhino.”

“Yes.  Each of you has a rhino.  So, you fight each other and whoever wins, gets the other man’s rhino.”

“What if someone doesn’t have a rhino?”

“You can win something else.  That way no one dies and you only have to fight when you feel like fighting.”

“What if someone wins all the rhinos?  You’re just saying that so you can win this war.”

“No.  I’m not,” she said. “Why don’t we call a truce for two weeks and see how you like it.  If you want to start the war again, you can let me know and we’ll figure something out.”

The men in the ranks were grumbling.

Judy explained what a truce was, while Danny sat on the troll man’s chest.  “If during those two weeks you break the truce, I’ll kill you.  Those are the rules.”

The man nodded and looked at their first in command, sprawled on the ground with a cat on his chest, bleeding from his face, his burned hand, swollen and blistered.   “I guess we can try it.  What’s two weeks, right?”  He turned and looked at the men, who were unsure of what was actually happening.

“I will meet with you on this exact spot, at this time, in two weeks, and we will see what happens next.  Just know that I can kill all of you at once, if I want to.  Really, I can.”

The men began shouting and raising their weapons.

“Let’s shake on it, shall we,” said Judy, holding out her hand.  And if it’s okay with you, I’d like to talk to the rhinos over there,” she continued, nodding toward the herd.

The man looked at the rhinos and nodded.  “They’ll try and kill you, but go ahead.” 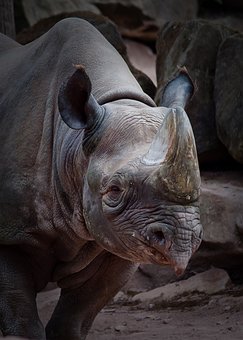 Judy walked up to a huge and extremely well armored rhino.   He began pawing at the ground and snorting.  She put her hand on the side of his face and ran it down to his short wide neck.  She petted him and spoke to him softly.  The rhino stopped pawing the ground and looked confused.  He lowered his head into a fighting position, ready to gore the enemy.  Judy sat down next to him and talked about grazing on the open plane, under the two suns.  She told him that he could be rid of his heavy armor and eat flowers and be free.  She told him about being happy, and as she did so, another rhino pushed at her back with his horn.  She held out her hand and he put his face into it.  “You’re so lovely,” she sighed.  “You have such wonderful hearts that men been turned dark, against your will.  You can have better lives.  I promise.”  By then three or four rhinos were around her and Danny was sitting on one of their backs.  More rhinos were drawing near and her Knight was pretty much frantic.  Judy started singing John Lennon’s, Give Peace a Chance, and the rhinos began to sway.  The men just stood and stared, their mouths hanging open. One or two of them began to tap their feet.

Judy stayed for awhile longer, then waved goodbye to the men said said farewell to the rhino herd.  She got to the edge of the forest and turned to see that four rhinos were following her.  She smiled and called to them.  The rhinos quickened their step.  “Look,” she said excitedly to her Knight, who was shocked into silence.  “We have rhinos, isn’t that wonderful.  Let’s get that armor off of them so they can breath.”

This entry was posted in Judy & Danny and tagged Judy and Danny...6. Bookmark the permalink.