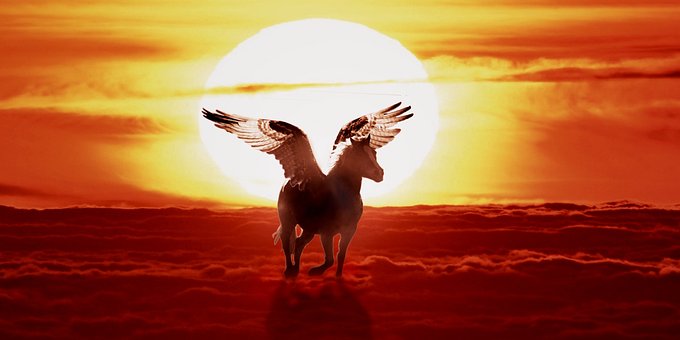 Rusty was anxious to go.  She was moving from foot to foot with barely contained excitement.  She was, after all, a war pegasus and loved to be in the thick of a battle.  She stomped her hoofs on the courtyard paving stones,  her long mane hanging loose, looking like burnished bronze.  Judy walked up to her, overcome by her raw and wild beauty.  She put her face against Rusty’s and said,  “You take my breath away. I love you.”  The Pegasus, snorted and nibbled on Judy’s cheek, so gently that it felt as if she were being touched by the wings of a butterfly.  “Are you ready, girl?”

Rusty whinnied and trembled with anticipation.  Judy moved to her side, put her foot into the stirrup thew her leg over the saddle.  Her Knight finished putting the last of his weapons onto various parts of his body, then hurled himself onto Comet, his huge gray pegasus.

Judy looked at her Knight and smiled, then they were in the air, laying flat against the necks of their mighty steeds, racing toward the front line.

Danny was mumbling in his pouch, wondering why the fox got to stay home, when he had to go.  Sometimes life was just so…unfair.

Judy’s whole body thrummed with joy.  The speed, strength and power of her pegasus along with the huge outstretched wings pumping the air, were so intoxicating that she had to keep reminding herself that they were going to a war zone.  But it didn’t take long before they heard the screams of animals and their riders.  She saw black spots in the distance.  Rhinos for sure.  Thick and stubby, they looked more like boxes, until one was close enough to see their deadly horns.

She held up her hand in agreement and they went to ground.  They landed, slid off their rides, and walked to where the fighters were dug in.

A women stepped forward and said,  “We’re  holding our position.  They have more rhinos than we expected.  We can fly better and faster, we have more agility, but they are relentless.”

Judy put a hand on her shoulder.  “Thank you for defending our home.”

The woman made a fist and placed it over her heart.  “To the Death,” she said.

“Let’s hope it never comes to that,” said Judy.

The woman nodded once and stepped back.

“Knight,” said Judy, and he moved to stand next to her.

She turned toward him.  “I’m going to ask you to trust me.

Danny was suddenly sitting on her foot.

“Report,” she said, and Danny told her how many men there were on the enemy line, how many rhinos, and where their weakest spot was.

Judy picked him up and kissed him all over his face and ears.

“Arooowwwooo,” he said, which in cat meant, not in front of the others.”

“Okay, here’s the plan,” she said, dropping Danny to the ground, so he could keep an eye on things.

When she was finished speaking, no one said a word.  The looks on their faces told her they thought she was insane, but she just smiled and told them everything was going to be just fine.  Because things always turned out alright for the good guys in fairy tales, right?

This entry was posted in Judy & Danny and tagged Judy and Danny...5. Bookmark the permalink.