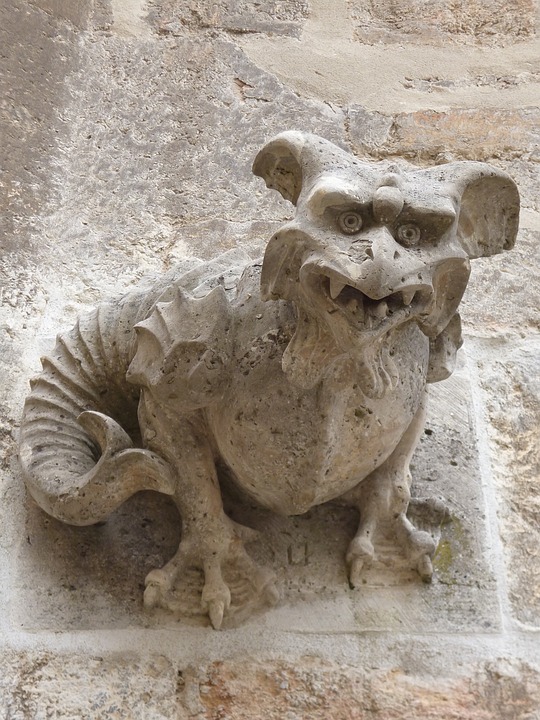 Sam, who had flown to where the Aces were staying, looked through the window and saw the battle begin.  He flew back to the library, went through the open window in the tower, dropped down to the first floor and skidded across the library table, where everyone was seated.

“Sam,” said the Librarian, running her hand down his rough back.  “Any news?”

The gargoyle made a noise, that passed for laughter, and said, “The fighting has begun.  Their children are going mad, around all that concentrated magic.  Their spell to quell the  desire in them, isn’t nearly ready.  I don’t know what the Aces are going to do.  I saw more of their children headed toward their building.”

“Thank you, my friend.  I’m grateful to you, Jen and Buttercup, for all that you’ve done.”

“Our pleasure, Librarian.  I’m going to the roof to keep watch,” and with that, he took to the air, leaving more long gouges in the hundred year old table.

“Okay, I have to say it,” sighed Detective Stone.  “Just how many women did these guys sleep with?”

“There are more Aces here than you think,” said the Librarian.  “Actually, there’s more of everyone, from everywhere, than you think.  Your government blinds you with disinformation and pretends as if everything that happens is science fiction, instead of reality. I mean think about it. Your species were making handprints on the walls of caves, not long ago.  Do you really believe that you got this far, this fast, on your own?”

“Well,” sighed the detective, “when you put it that way.”

“So, they weren’t zombies?” asked Jim, for the tenth time.

“NO!” they all shouted at him.

“Do you think the Aces will start killing them?” asked Dusa.  “I mean, what are they going to do?  They won’t be able to control them.”

“Is that really our problem?” asked the Librarian.

“You said you didn’t want them killed, so then yes.  If you don’t care if they kill them, then no,” said Dusa.  “One thing for sure…you need to report them and stop this from continuing.”

“I already did,” said the Librarian.  “They won’t stop.  They’ll just try and kill the magic in their offspring.  And, it’s obvious, that they won’t stop using human women, who have no idea that they are being taken advantage of by other worldly beings.  I think because of everything they have been doing, for so very, very long, they’ll lose more than just their wings.”

“What will happen to them?” asked the detective.

“Well, if my guess if right, according to the rules, they’ll lose their wings and be exiled to a pocket dimension, shut off from others, pretty much forever.”

“You have to understand,” said the Librarian,  “what they did to those women will leave a mark and have lasting consequences.  You don’t sleep with an Ace and forget what it was like.  Believe me, no human male could ever live up to THAT experience.  But Aces don’t stick around.  It’s not as if they’re going to get married and settle down, so for the rest of their lives, the women they were with will be searching for what they felt when they were with them.  Aces can give off unconditional love, at least that’s what you call it, and they know exactly what each woman wants.  Think about what that means in a place like this.  A place where men are too often violent, thoughtless, cold, selfish….”

Dusa smiled and sighed loudly.   “She’s right, you know.  They really are….”

“Wait,” said Jim.  “So not only will their kids be searching, but so will their mothers?”

“Exactly,” said the Librarian.  “The Aces aren’t from here, they aren’t human.  They are destroying lives, with their actions.  Leaving humans longing for things they can’t have.”

“But is seems to me,” said Jim,  “that the Aces are longing for human women.  They seem addicted, since they can’t stop wanting them, no matter what the cost.”

Just then a man, with muddy feet, a torn, button-down shirt, and hair that looked like it had been styled with an egg beater, walked into the room.  “Uh, I’m looking for my brother.  His name is Wilson Cormack.  Someone said he was here.”

This entry was posted in the Librarian and tagged The Librarian...24. Bookmark the permalink.

2 Responses to The Librarian…24