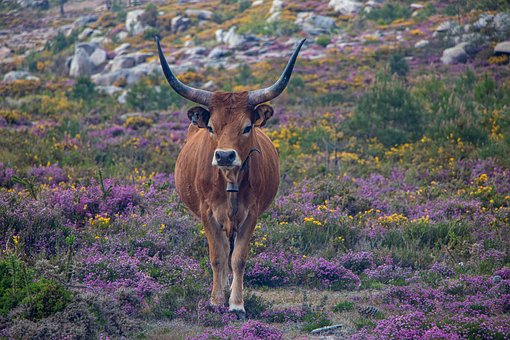 Dennis had been planning his escape for over a year.  It was a difficult thing to do, since he didn’t know what existed outside of the pasture in which he was kept.  He was born on the ranch and had never been anywhere else.  But he was determined.  He knew that somewhere, there was a better life waiting for him…probably…maybe…possibly.  So, he forged ahead.  He discussed his plans with a lovely steer named Elsa, who, unfortunately, was also born on the ranch and had no idea what lay on the other side of the fence.

Eventually, the day came for Dennis to make his escape.  He told Elsa that he was going through a small break in the fence and then heading…uh, “That way.”  When night fell, he said his goodbyes and left the ranch.  He walked slowly, due to the loud and horrible bell he was forced to wear around his neck.  The slower he walked, the less noise it made.

He hadn’t traveled far, when he met another steer on the road.

“You should lose the bell, man.  That thing will get you caught,” said his new friend.

Dennis moved next to the steer, who bent down and chewed through the rope.  The bell fell to the ground and a huge wave of relief came over him.  The noise had finally stopped.  No more ringing.  In a fit of anger, Dennis stomped on the bell, until it was flat.

“I know how you feel, man.  I did the same thing.  Those things are torture.  I’d like to put a bell around the neck of the guy who thought he owned me and see how he’d like it.”

Dennis agreed and asked his friend where he was going.

Fortunately, that was the same way Dennis was going, so the two joined forces and, bell free, they walked through the beautiful meadow, going wherever that way took them.