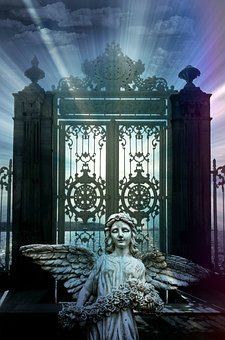 God was standing outside the gates, behind and to the left of the angel statue.  He was holding a golden clipboard and calling off names.  When someone said, “Here,” or raised a hand, he put a check mark next to their name.

People in line stood silent and in an orderly fashion.  Every now and then they looked ahead to see if the line was moving and how much longer it would be before it was their turn.

To each of the people waiting, God looked exactly as they expected him to look, therefore, he looked different to each of them.   Mists of the life they just left floated around them, but bit by bit pieces faded away.  Eventually, their emotions would fade but that would take some time, since they were so strong.

“NEXT,” said God, and everyone rejoiced, knowing they were one person closer.  The line never shortened, so getting close enough to hear his voice was exciting.

All of a sudden a woman walked past them.  She was dancing and smiling, humming a rock and roll song.  She passed God without a second glance, went through the gates, and kept going.

A woman started yelling, another wept and still others shook their misty fists at the woman.  Anger and outrage quickly sped through the line.  After all, some of them had been waiting for what seemed like years and she just went right through the gates.  The souls were furious and felt cheated.  So they continued to scream and yell.

“Why didn’t she have to wait in line, like everyone else?” said the next soul in line.

God smiled and said, “She didn’t have to wait because she doesn’t believe in me, therefore, she’s free to go wherever she likes.  There are no fences, gates, lines, or rules, for a soul who only believes in possibilities and freedom.  She doesn’t see those things.  She believes in herself and makes up her own rules.  Now straighten that line and be silent.  You’ll have to go back, again and again, until you learn what she already knows.”

The people in line watched her dance and do cartwheels until she disappeared.  Their anger did not abate but they knew better than to show it and break the rules.  So they straightened the line and stood in silence, hoping the line would move faster.

God shook his head, sighed and said, “NEXT,”  as a man danced through the gates, snapping his fingers and laughing.