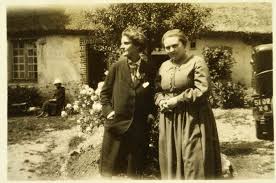 “I think it’s a great idea to start a mail service, so American’s can have their mail sent to the shop, where they can pick it up.  There’s a nice cubby right over there, so I freshened it up, while you were gone, so you can use it for that purpose.”

“Maybe someday, when this store is kitty-corner from Notre Dame, your books will be stamped with a SHAKESPEARE AND COMPANY rubber stamp on the first page.  People will love that because they love you and this place.  Book bags will have your logo on them.”

“I doubt that and what’s a book bag?”

“Yes, but you’ll like him anyway.  That’s how men get away with the terrible things they do. People are too forgiving and that allows men to keep hurting women.  It’s sick.

I just wish you would get to know Scott better.  Maybe the Murphys’ as well but you won’t.  It’s not your fault.  Scott and Zelda aren’t around that much and when they are they spend time with Gerald and Sara.  Gerald and Sara aren’t around the bookstore at all.  But they totally changed the world.  Huge supporters of the arts and generous beyond belief.  They’re part of this whole scene.  Picasso hates women.  You can see that very clearly in is work.  He uses them but hates them at the same time.  He liked Sara but then everyone fell in love with her.  At least that’s what everyone said.

This is the period of time I’ve always wanted to live in.  If I did, however, I’d probably be poor and doing someone’s laundry.  You know how that goes.  Be careful what you wish for.  But Paris was the place to be, even if the people inventing the future didn’t realize it.  But that’s the thing, isn’t it?  We can’t ever see what we’re doing, when we’re doing it.  We can only see what happened after the fact, when we’re looking backward.  I mean, you had no idea that you would change the future by opening this bookstore.”

“You have an active imagination.”

“I’m not sure that was a compliment.”

“Thank you.  So many books will be written about this place.  You’re a brave and amazing woman Ms Beach and this is a dream come true.  To meet you and be here in this incredible shop.”

“My dear girl.  I have no idea what you’re talking about but Adrienne sent cookies for you.  She’s the one who encouraged me to move to this site.  I was around the corner and this shop became available, so now I’m across the street from her.  The shop is larger and I’m quite happy with it.  Customers can buy books in French from Adrienne and books in English from me.”

“Many people say that Hemingway never ran with the bulls.”

“Never mind.  I just wish you wouldn’t like him but that’s the way life goes.”

“I know.  You are a gentle and lovely person.  I’m glad you live in this time slot because you’d be eaten alive in the future.”

“This is a cell phone.  It’s a camera, a computer, and everything else you can imagine.  It does math, it can get you where you want to go, you can play games on it, listen to music, write to people, send pictures and you can read books on it.  It doesn’t work here because there are no towers.”

Sylvia picked up the cell phone.  “This tiny thing can do all of that?”

“Books are in there?”

“There’s a man looking in the window.”

“It’s Hemingway.  He’s hungry, broke, and you’re going to give him a list of books to read and he’ll read everyone of them.  You’ll lend them to him because you’ll see something in him and want to encourage him, even though he’s insensitive and cruel.  He wasn’t nice to Scott either and Scott helped him get started.  He uses people but you’ll do it anyway, because that’s just who you are.  Here’s a list of all the books he’s going to write before he kills himself on July 2nd, 1961.”

The bell tinkled and Hemingway walked in, a smile on his face.   Sylvia smiled back.

A rose from last summer…

Comments on: "SHAKESPEARE AND COMPANY…2" (7)