I constantly see sayings and quotes that tell everyone to let compassion guide them, or to let the love in their hearts do whatever they want them to do.  Those words are so far removed from the reality of the world that I can’t believe anyone even understands what they mean.   The thing I like most about this stuff is it NEVER TELLS YOU WHAT TO DO, OR HOW TO DO ANYTHING THAT CAN MAKE THEIR WORDS WORK IN TODAY’S WORLD.  Instead they just go on and on and on telling people to love and give and blah, blah, blah.  How about one single concrete thing that ANYONE can do to make the war torn, hate filled, misogynist, racist, agist, greedy, violent, insane government run world different.  None of those saying mean anything.  They are ridiculous and they don’t change a thing.

Action changes things, not wishful thinking about compassion and kindness.  Verbs, think verbs.  We need to stop talking and start doing.  Boycott, write letters, get groups together who are liked minded and want to WORK for change.  SUPPORT those businesses who are compassionate and environmentally sound.  Realize that when you spend your money you are supporting the beliefs of the the owners.  There are huge stores that sell stuff for lower prices.  They hate women, gays and many other segments of the population.  They underpay their employees and don’t insure them, yet, people buy from them.   Customers support THOSE TERRIBLE  BELIEFS AND PREJUDICES with their money.  Worse yet, the owners use customer money to support causes most of us are AGAINST.  By supporting those places people are also supporting the belief that it’s okay to underpay, not insure and hate large segments of the population.

The words on signs and in books do not work in the real world.  Businesses that support war, that poison our water, that pollute our air,  and have hateful prejudices against others, need to be stopped.  Signs and words won’t stop them.  If you are against something you have to act.  You have to actually DO SOMETHING.  Talking and complaining about it won’t CHANGE ANYTHING.  Wishing things were different won’t change anything.

Buying paper products that are dyed to match your bathroom decor poisons water, even the white color.  We have to think about what we can DO to stop the bad things from happening.   If a lot of us DEMANDED that paper products stopped being dyed, by buying products that were environmentally safe, those huge polluting companies WOULD CHANGE OR GO OUT OF BUSINESS.

See it’s UP TO US to change things.  WE are the only ones who can do it.  The greedy people are happy to take our money and poison us.  Our government loves having wage slaves to keep deep in debt while they rake in the money.    They get kids in debt with college loans that WILL NEVER GO AWAY EVER.   We MUST DEMAND CHANGE THROUGH ACTION.  You don’t have to demonstrate, you don’t have to stand in the street or chant or do anything you don’t want to do but if you buy anything, that money is going to people who may be funding things you oppose with a passion.

Violence and bullies are everywhere.  Not just on line and in schools but in business, government, and the places you shop.  We can make a difference.  Write letters to those you support, write letter to those you oppose.

Those signs teach people to be meek.  The meek will never inherit the earth.  The meek will work for the non meek and be killed when they are no longer needed.  Big dogs on the block, remember.  We have to be REALISTIC about the kind of world we live in today.  A world where our own government sells arms to countries that kill our own soldiers.  A world where cyber bullies talk kids into killing themselves because they aren’t pretty.  A world that LIES.

The businesses who pollute were supposed to be fined and they were given a certain amount of YEARS to poison us.  It’s been ages and they are still doing it.  The reason that’s possible is because money is more important than the health of the planet or our own health…just ask the people who were just poisoned in Flint, Michigan.  Where does compassion and love fit in there?  Should we be compassionate for the people who drank the poisoned water, or the people who KNOWINGLY poisoned them?   Are any of the bad guys in jail?  Are they sill in their positions and getting paid?

If we don’t face the problems we have we can’t act on them.  We can’t bring about change.  Pretending that everything is okay won’t make everything okay.  The world has changed and we have to change as well.  It’s not 1930 when people heard the news on the radio and they were having the war to end all wars.  Kids were nicer to each other,  they played outside and rode bikes.  They played games and everyone ate dinner together, really, at the same time.  No one was exhausted from gymnastics, and ten million other after grade school activities, kids were busy looking at bugs and climbing trees.   This is a different place.  A place where people can go into a school and kill students and teachers.  Where kids are driven everywhere and live in dark rooms looking at screens, after their adult supervised activities, because they don’t normally get to actually PLAY anymore.  Life has become dangerous for everyone, everywhere.  Travel is available to everyone, the internet connects all of us.  Different times.  Compassion and love…uh, nice idea but how will it stop the destruction?  HOW?  In case you haven’t notices those who try to run on those platforms are murdered.  We need new tactics.  We need to use our power to spend the money we have by supporting those who have values we believe in.   We need to actively participate in what’s going on.  Otherwise we need to sit down and watch TV,  read stupid signs on the wall, or do whatever people do on the internet and let the world fall apart around us, because nothing will change unless we change it.  Hey, I’m just saying.

This is a must see TED Talk by David Eagleman…really, don’t miss it

Rising Hawk wrote this adorable story for me. It’s wonderful and you can imagine the whole thing taking place. Thank you Rising Hawk for this fabulous tale. ❤

I
think
the
monsters
love
their
jobs
and
at
night

when
we
are
all
asleep 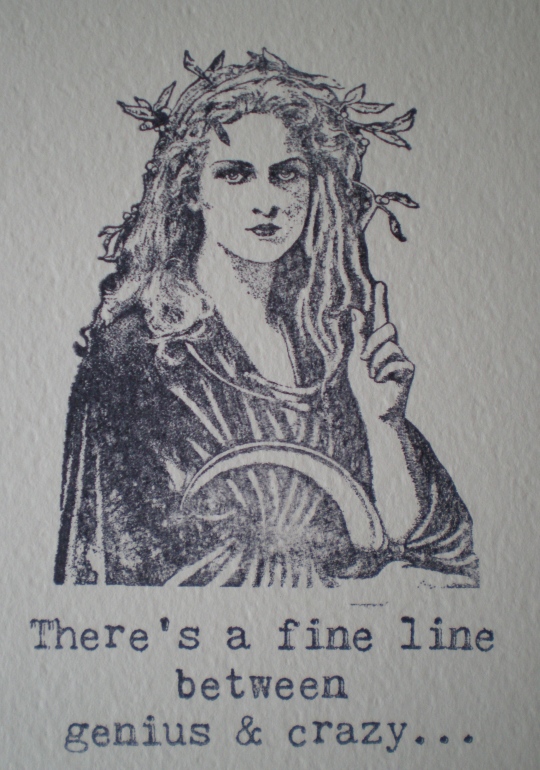 Who gets to decide what those two words mean?  Creative people live on the line between genius and crazy and cross it whenever they must, in order to chase an idea, a sound, a word, or a new dance step.    We see the line. We are the line. We aren’t afraid of either word because we understand that they work together  protoduce art. 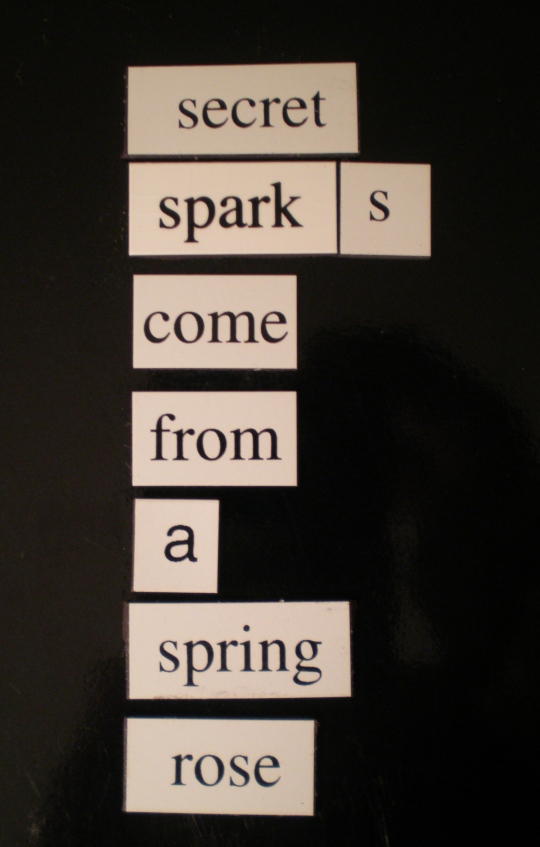 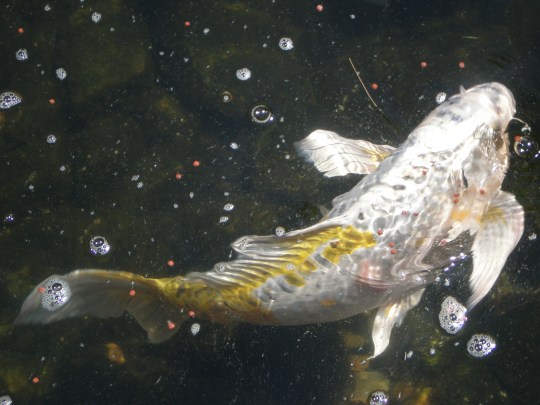 “People believe that you are good luck.  There are statues in your image and you’re written about in many books.  You are part of Feng Shui and people incorporate you into their lives.”

“Why would I want to bring good luck to humans?”

“That’s really funny, since everyone is trying to get rid of you. Don’t tell any other beings about this  luck thing, it will just make them question our loyalty.

“Okay, but I thought everyone knew about it.”

“How could they know about it.  It’s not real, you make up.”

“Look, I’m a fish.  But if humans believe something is lucky, that’s a very bad thing.”

“If they believe we can bring them luck they start to breed us, control us, grow us, sell us and they sell us to people who don’t know how to care for us.  We become a product, a commodity, a thing, an asset, a status symbol,  because we are believed to bring luck.”

“No one wants to be noticed by you guys.  Being noticed means captivity, interbreeding, suffering and death.  I’m a fish.  That’s it.”

“Why isn’t a gold fish lucky?  Oh, yeah, because you kill them by the millions.  Lucky for you, not lucky for the fish.  See what I mean? Nothing humans want is ever lucky because you are a terrible species.”

“I’m really sorry about that.”

“Your species plays with all the other beings on earth.  You cross breed, interbreed, you trap, cage and modify natural beings.  You make up lies about what you do and tell people luck will come your way if you only have one of whatever it is you’re trying to sell.  Look what you’ve done to dogs.  You never once think about what you’re doing to any of US.  We are NEVER LUCKY when we’re around you.  If you’re around we’re usually sick and dying.”

“Yes.  I brought a loaf of whole wheat, in case you were hungry.”

“Look, you know that Koi are Carp, right?”

“Well we are.  We are bottom feeders.  We love algae.”

“I didn’t know that either.”

“Tell people there’s nothing lucky about us.  They people we are carp, bottom feeders, and tell them to leave us alone.”

“I will.  Thanks for talking with me.  I’ll take the bread with me.” 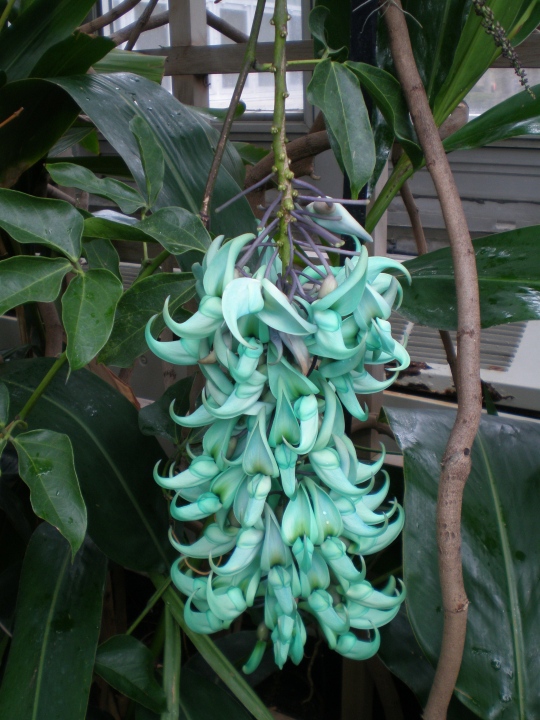 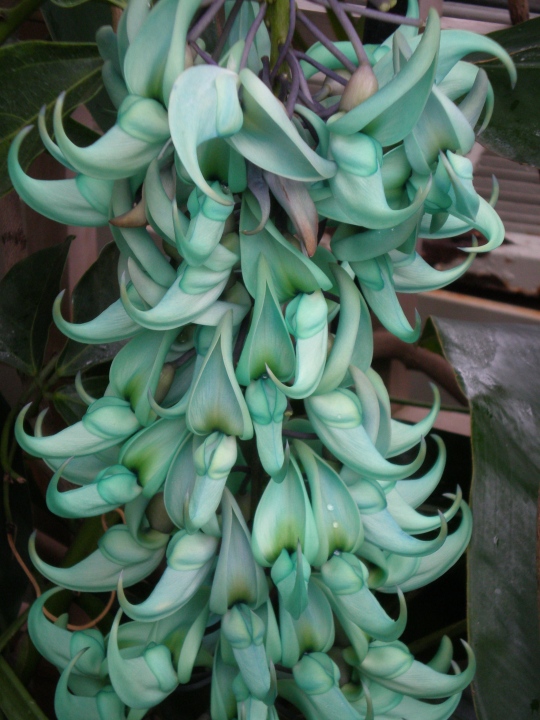 anyone
or
anything
can
be
or
feel
abandoned

we
see
what
happens
when
abandonment
takes
place

they
start
to
die

those
things
will
fall
apart

She
will
reclaim
us
as
well

we
are
starting
to
die 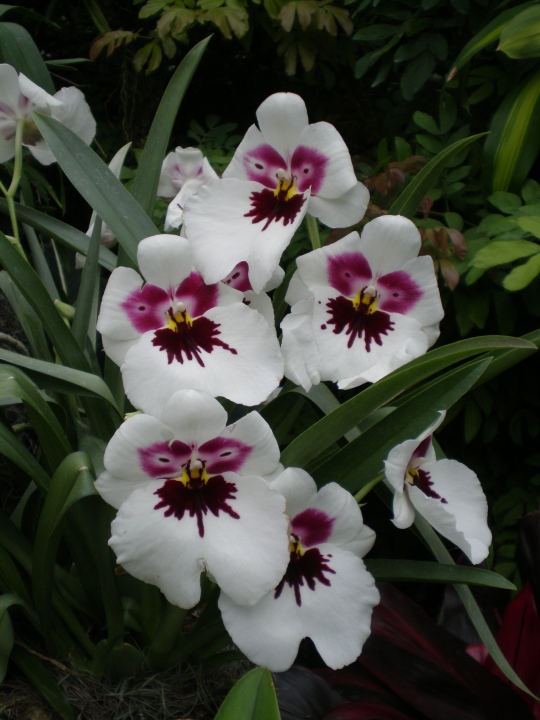 My cousin and I went to the Chicago Botanic Garden today.  Since nothing was growing outside and the weather was dark (as usual), rainy, raw and generally yukky, we spent time in the greenhouses.  Everything was blooming like crazy and the orchids were gorgeous.