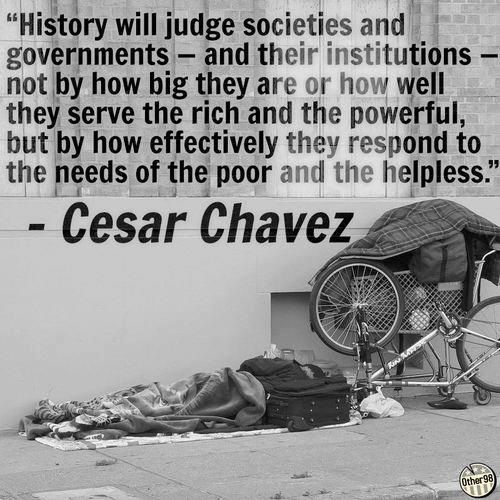 I like Cesar Chavez.  I’ve boycotted for him and I think he’s a good guy, at least he seems to be, but sayings like this are meaningless.  No one cares what history will say about us.  History is simply one lie after another, written by whoever is running the show, is literate, and has the most power.  We don’t have a single school history book in the US written by Mexican, African American, Asian, or Women writers.  Our history books, the lies that are shoved down our throats, are written by white males who write what they want us to believe, not what actually happened.   No minority authors are taught on a regular basis and their books used as TEXT books in every school.

The thing is, people are suffering right now and telling them that people, five hundred years from now,  will think we were terrible,  doesn’t help anyone.    We look back on the atrocities that took place in the past but the people who were alive during those times suffered and died while the events were taking place.  We can say how terrible things were but that doesn’t help the people who lived and died because of those things.  And we will never know what actually happened anyway, not to the actual people, because they aren’t the ones who write the books.

History is a lie.  History is pretend.  History is all about white, elite, males and how they killed everyone and are proud of what they did.  History is war and death.  History has nothing at all to do with truth. The things taking place right now will be “white” washed and turned into something else and no one will FEEL it, or care.  History is a study of lies told by the powerful elite.

We need to take care of our problems and forget about what people, if there are any people left, will say about how terrible we are.  We already know that.  No one will care and whatever they read won’t be the truth anyway.  History is literally His Story and everything about His Story is told from HIS point of view.

This entry was posted in Politics/Herstory, Quote and tagged History, Politics, Quote by Cesar Chavez. Bookmark the permalink.

8 Responses to Okay, so…