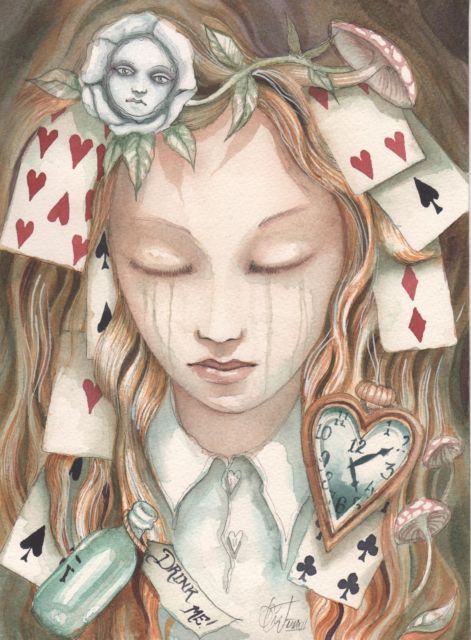 Picture from:  Pinterest
Artist:  Dominic Murphy
“I knew you’d get around to me eventually.  I guess it was inevitable.  Look, I saw the White Rabbit in the garden.  I followed him.  I don’t know why, I guess I was a curious child and it seemed like the thing to do.  I saw him leap into the rabbit hole and I jumped in after him.  I never even thought about it, I just did it.  I ended up in a room with a table and a bottle that said, “Drink Me.”  I didn’t think about that either, I just drank it.  Then I went through the tiny door and there I was, in the land of the bizarre, strange and beautiful, where animals and birds could talk and things that shouldn’t be alive, were.  I wandered around and found the tea party.  I sat down, met the dormouse, Hatter, Rabbit and a few others who dropped by.  The food was terrible and the tea was cold.  Everyone acted as if they had never met a human before and it wasn’t until later that I found out that, aside from Rabbit, that was true.  Hatter was mad, of course, but not as mad as many think.  Rabbit was twitchy, snowy white and had an outstanding sense of fashion.  He was obsessed with time and although he was late, now and then, it wasn’t often.  He expected others to be on time but no one ever was.  No one cared.  Well, if the Queen called you to the Palace, it was a good idea to be there on time, since she did not like to be kept waiting.

I met the Queen quite by accident.  She was using one of the flamingoes as a kind of golf club, to play a game in her garden.  The flamingo was rigid and afraid to move, since he didn’t want to anger her.  I was outraged, of course, it was a clear case of animal abuse, or bird abuse, either one, or maybe both.  I heard that she killed anyone she didn’t like but I couldn’t stand by and watch the poor birds get concussions for her amusement.  I mean what would you do?  So, I stepped up and told her to stop what she was doing.  She told her guards to cut off my head!  Can you believe that?  I mean honestly, a bit harsh, don’t you think?  The thing is, the words I spoke were based on where I came from and the way I saw the world.  I didn’t understand that I was in a place where they did things differently, saw things differently, and I shouldn’t have interfered.  Admittedly, I didn’t know better but that doesn’t mean that I’m not responsible for what happened, because I am.  The flamingoes heard me tell the Queen that she was abusing them.  One thing led to another and the birds killed her.  All my fault.  Well, it was the fault of the flamingoes, since they were the ones who gnawed her to death, but I showed them that there was a different way to live.  I brought my beliefs into her world and it changed everything.  The flamingoes changed their beliefs and that changed their lives.  They send me a Christmas and birthday card every year and on them they write, “Thank you for our freedom.”

I found out later that the Queen wasn’t what she seemed to be.  Everyone told me not to feel responsible for her death but t’s my fault and there’s no other way to look at it.  It’s something I’ll have to live with.  Cheshire misses her, but i’m not sure whether it’s because he can’t torment her any longer, or because he really cared about her.  It’s hard to know with him.  Dee and Dum don’t even know she’s gone and Hatter has been making hats for me, since he’s not making them for her.  The Queen’s guards follow me around, now and then, but there’s no one to tell them what to do, so they don’t know whether to arrest me or not.

I didn’t know that I would change things so dramatically.  I didn’t know a lot of things and I may have done more damage than I could have ever imagined.  I visit once a month but otherwise I live above ground.  I see the Rabbit all the time, since he likes the fresh vegetables the farmers grow.  Everything in Wonderland is deceiving, especially the colors.  The colors can make you believe things that aren’t true.  You have to be carful not to let them lead you astray.  You have to make sure they don’t stop you from finding your way home.”