ANYTHING CAN HAPPEN IN THE CITY…Chapter Two

“What if I don’t want to be ONE WITH ALL THAT IS
and I just want to be one with the guy across the hall?”

“I met someone,” I said into the phone, as I was scooping Neptune’s Ocean onto a lovely white plate for Ethel, my huge black cat.

“OH MY GOD, TELL ME EVERYTHING,” screamed my best friend.

“He thinks he’s the son of the Devil,” I said, petting Ethel’s back.

“Are you going to see him again?”

“Did you hear the part about him being the son of the Devil?”

“Yeah, but some are less perfect than others, Lex.”

“Can he start fires just by looking at something?”

“Tell her yes, but I try not to do that unless I’m forced into it,” he snickered, as he casually leaned against the counter, his arms crossed over his chest, the faded blue of his shirt setting off the color of his eyes in a pretty spectacular way.

“How did you get in here, what’s your name, why are you stalking me and lastly, will you die if I stab you through the heart a couple of times?”

“I moved my molecules from where I was to here, my name is long and in a language you couldn’t possibly understand or pronounce, I’m not stalking you and only for a few minutes but it should give you enough time to get away until I find you again.”

Ethel rubbed against his back and purred loudly.

“Traitor,” I said, glaring at her.

“Cats like me,” he said, picking her up.  “She’s beautiful but she doesn’t look like an Ethel.”

“You don’t look like the son of the Devil either, so?”

“I’m thinking about it.”

“I won’t fight back,” he said dropping the cat onto the counter.

“Because I’m stronger than you by a factor of a million and you’re the Flaming Sword of the City.”

I stood there for a minute or two, then pulled my biggest and sharpest knife out of the drawer next to me and laid it on the counter.  “Will this do it?”

“Most assuredly,” he said, staring at the knife.

“If you don’t give me a name I’m going to call you Todd.”

“Call me Ace,” he said immediately.

“Because it’s stupid and you probably cheat.”

“How about Dark Star?”

“Is that your name?”

“Nice, but no.  It’s too long and it sounds like you took it from a Spielberg movie. Besides, your father is the Morning Star and that’s enough stars in one family.”

“So you believe I’m the Devil’s son?”

“Not even a little,” I said

“But you know my father’s name.”

“Everyone knows his name.”

“What do you want to call me?”

“Spawn of Satan, comes to mind,” I said merrily.

“The children’s game is called Tag and has nothing to do with it.  It’s because the tags on your shirt are peeking out from under your collar.”

“Tags it is,” he said, nodding.  “What should I call you, other than Flaming Sword of the City?”

“Lily and I’m not the Flaming Sword of anything.”

“Is Lily your real name?”

“Pretty much,” I said, picking up the knife.  “Now, for the last time, what do you want and what does it have to do with me?”

ANYTHING CAN HAPPEN IN THE CITY…Book One

Finally, the answer we have all been waiting for… 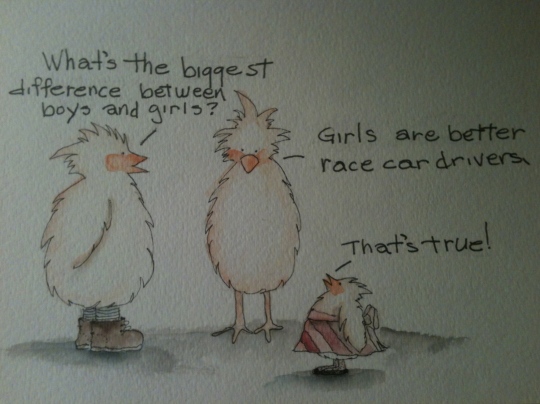 Chickadees are nesting in the large white birdhouse on the left.  So exciting.

the
only
thing
missing
is
a
cat

ANYTHING CAN HAPPEN IN THE CITY…Chapter One

“Sometimes getting rid of someone is like trying to get gum off the bottom of your shoe.
You need something sharp and pointy…like a knife.”

“Goose, goose duck,” said the good-looking guy suddenly standing next to my table.

“Go away,” I growled, turning the page of my book.

“Don’t you always need a password to get into places and to talk to people?” he asked, looking confused.

“Yes, but that doesn’t mean that I’ll like it or that I will talk to you.”

“But you are talking to me,” he said, stating the obvious.

“Yes and no,” I said, staring at him.  “I’m talking to you in order to explain something to you.  We are not having a real conversation.”

“I would prefer to stay.”

“If you won’t go, then I will,” I snapped, gathering my things and shoving them into my beat up gray Messenger Bag.

“Have I offended you in some way?”

“Look, I just wanted to sit here, drink my hot chocolate and read my book.  That’s it.  I didn’t come her to talk to anyone, including you, maybe even especially you.”

“Move,” I said, pushing past him, dropping my paper cup into the trash by the door.

“Wait,” he said, rather loudly.  “Is your name Flaming Sword of the City?”

Okay, that got my attention.  I mean, come on, no one EVER asked me if my name was  Flaming Sword of the City before so I stopped, turned, and stared into his crystal blue eyes.  “Are you on medication?” I asked, “because if you are, it’s not working.  Well, either that or it’s working too well and you have just been sucked into an alternate reality where the rest of us are simply bit players.”

“Does that mean yes?”

“No, it means that I’m worried about your mental health.”

“Why would you worry about me at all?   You don’t even know me.”

I opened the door and he followed me out.  “Can I walk with you Flaming Sword of the City?”

“I squinched  my eyes closed really tight and counted to ten.  When I opened them, he was still there.  “Who are you?”

“I’m the son of the Devil but he refuses to put his name on my birth certificate until I prove that I’m worthy.”

“Not in a million years,” I answered, sliding into the back seat.

“You probably think that’s a long time,” he chuckled, bending toward me, his perfect white teeth bright, even in the gloom of the dark and rainy day.

“Trouble?” asked the cabbie, as I slammed the door.

“No, but thanks for asking.”

ANYTHING CAN HAPPEN IN THE CITY…Book One, Books

Sometimes the answer you get isn’t the one you expected…

Taken by the Moulin Rogue.